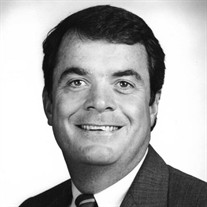 Frankfort – A. E. “Buzz” Beard, age 79, passed away peacefully on Sunday, November 7, 2021, at Louisville Baptist Hospital East. He was born in Hardinsburg, Kentucky on April 9, 1942, to the late Arthur “Brick” and Bonnie Beard. He graduated from Breckenridge County High School and later from Eastern Kentucky University. Buzz was a Veteran of the United States Marine Corps. He served his first job with R.J. Reynolds Tobacco Company in Indianapolis, Indiana when he met his wife of 54 years, Kitty Swain Beard. They were married on November 25, 1967. In 1969, they moved to Frankfort with The Nunn Administration as Director of a newly formed Board of Traffic Safety. After his service with The Nunn Administration, he started Beard Realty in which he was the sole broker until he opened the Coldwell Banker Franchise. Following, he served with Commonwealth Century 21 where he finished his real estate career. He loved Frankfort, the community and the politics. He worked as the 6th District Chairman of the Republican Party and former President of the Jay-Cees in Frankfort. He was instrumental in starting the Crime Stopper’s Program. Buzz served as the President of the Board of Realtors and was active in Lions Club and United Way. He was a member and served as Deacon at the First Presbyterian Church. Buzz was dedicated to civic leadership and his community. In addition to his wife, Kitty, he is survived by his sons, Arthur Swain Beard (Ginger) and Christopher Hart Beard (Heather), both of Louisville; brother, Ken Hart Beard (Susan), of Hinsdale, Illinois and grandchildren, Bryce, Wesley, Mary Swain, Olivia, and Camden Beard. Services will be held at First Presbyterian Church at 2:00 p.m. on Tuesday, November 16, 2021. Private burial services will follow at Frankfort Cemetery. Visitation will be held at Harrod Brothers Funeral Home from 4:00 p.m. until 7:00 p.m. on Monday, November 15, 2021. In lieu of flowers, expressions of sympathy may be made to the Alzheimer’s Association or Franklin County Humane Society. Arrangements are under the direction of Harrod Brothers Funeral Home & Crematory.

The family of A.E. "Buzz" Beard created this Life Tributes page to make it easy to share your memories.