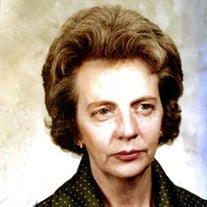 Frankfort – Alberta Charlotte Wright Leitch, age 90, passed away on Saturday, June 22, 2019. Services will be held at Harrod Brothers Funeral Home on Thursday, June 27, 2019, at 11:00 a.m. with Rev. Jon Sutphin officiating. Burial will follow at Sunset Memorial Gardens. The family will receive friends at Harrod Brothers Funeral Home from 9:00 a.m. until 11:00 a.m. service time on Thursday. Mrs. Leitch was born in Frankfort, on April 15, 1929, to the late Charles Franklin and Stella Russell Wright. She was united in marriage to her husband of 54 years, Charles Sidney Leitch. Mrs. Leitch was a homemaker, who especially enjoyed sewing. As an active member of the community, she served on the Franklin County Fair Board for several years and was a 4-H Leader. Above all, she loved spending time and making memories with her children and grandchildren. She is survived by her children, Linda Dailey (Mike), Chuck Leitch, and Teresa Phillips (Ricky). She was also blessed with 6 grandchildren, 9 great-grandchildren, 1 great-great grandchild and many nieces and nephews. In addition to her parents and husband, she was preceded in death by her siblings, Jane Durmond, Ann Howser, Nellie Bright, and Jack Wright. Serving as pallbearers will be Sid Dailey, Russ Leitch, Mickey Leitch, Eric Phillips, Ricky Phillips, and Dan Mauer. Honorary pallbearers will be Bill Wiley, Terri Wiley, and Tracie Mauer. In lieu of flowers, expressions of sympathy may be made to Alzheimer’s Association and American Cancer Society. Arrangements are under the direction of Harrod Brothers Funeral Home.

The family of Alberta Leitch created this Life Tributes page to make it easy to share your memories.