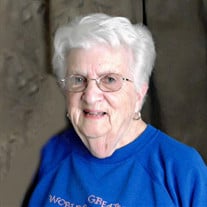 Frankfort – Anna Mae Dunnigan, age 94, passed away Thursday, March 28, 2019 in the Bluegrass Hospice Care Unit at the U.K. Markey Cancer Center. She was the widow of William Taylor Dunnigan with whom she was married for 68 years. She was born to the late Edgar and Mary Slattery Nash on September 17, 1924. Anna Mae graduated from Bridgeport High School. She was a devoted member of Evergreen Baptist Church, where she taught children’s Sunday School for many years. She worked for the Franklin County Soil Conservation for a short time. Most importantly, she was a devoted wife, mother, grandmother and great-grandmother. In her spare time, she enjoyed working in the garden with her flowers, watching the cardinals at her bird-feeder and solving jigsaw and crossword puzzles. With a great sense of independence, she lived at home and loved her daily visits from her son and daughter-in-law, or receiving phone calls from family and friends. She is survived by her son, William Scott Dunnigan and wife, Betsy; four beloved grandchildren, Lori Truesdale Reisig, Stacey Banks (Robert), Kimberly Dunnigan (Mike), and William Erik Dunnigan (Megan); six great grandchildren, Chase Forester, Ty and Taylor Bryan, Levi and Laine Dunnigan, and Aria Truesdale; sister, Nell Jackson; son-in-law, Joe Sheily, and many nieces and nephews. In addition to her husband and parents, she was preceded in death by her loving daughter, Sandra Kay Sheily; grandson, William “Billy” Truesdale; four brothers and one sister. Services for Anna Mae will be held at Harrod Brothers Funeral Home on Thursday, April 4, 2019, at 11:00 a.m. with Rev. Ricky Simpson officiating. Burial will follow at Sunset Memorial Gardens. The family will receive friends from 9:00 a.m. until 11:00 a.m. service time on Thursday. Serving as pallbearers will be Scott Dunnigan, Erik Dunnigan, Robert Banks, Mike Bryan, Ty Bryan, and Larry Ballard. Honorary pallbearers will be Betsy Dunnigan and Ronnie Jackson. In lieu of flowers, expressions of sympathy may be made to Evergreen Baptist Church or Bluegrass Hospice Care. Arrangements are under the direction of Harrod Brothers Funeral Home.

Frankfort &#8211; Anna Mae Dunnigan, age 94, passed away Thursday, March 28, 2019 in the Bluegrass Hospice Care Unit at the U.K. Markey Cancer Center. She was the widow of William Taylor Dunnigan with whom she was married for 68 years. She was... View Obituary & Service Information

The family of Anna Mae Dunnigan created this Life Tributes page to make it easy to share your memories.