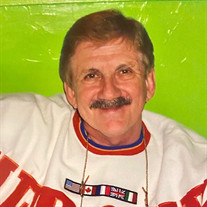 Barry Kirk, 74, of Frankfort Kentucky passed away on December 7th, 2021 surrounded by his family and friends. He was born to parents Edward Franklin Kirk and Dorthy Lorraine Botkins, on August 24th, 1947, in Frankfort, Kentucky. Barry graduated from Franklin County High School in 1968. He was active in the 4-H and Automotive Club as well as the FFA. During and after Barry also had a love for music and played the piano & organ for several local bands including the Prestations and Castaways. Barry had a passion for the automotive industry. He was the GM for several dealers in the Frankfort area and was the eventual President and owner of Toyota of Frankfort, BK Motors, RV and Marine and co-owner of Import Cars R Us for a period of time. He also served as President for a short time of the Kentucky Auto Dealers Association. In his free time Barry enjoyed fishing and hunting all over the world. He was an avid collector of muscle cars, knives, firearms, boats and outdoor equipment. He was a devout Christian who was a long-time member of Living Waters Christian Church in Shelbyville Kentucky. For several years he made an annual pilgrimage to Israel where visited several holy places and was baptized in the river Jordan. Barry also served as an assistant pastor at Guist Creek Church and was a member of the Good News Band for a short amount of time as well. He was also a financial contributor to several Christian health and outreach organizations around the world. Barry is survived by his three children, Lisa Moffett, Michael Kirk and Chris Kirk. He enjoyed taking family vacations on the boat every summer at Dale Hollow and Lake Cumberland. He also enjoyed attending sporting events for his 10 grandchildren that he deeply loved including Austin Kirk, Nick Kirk, Cody Wall, Christian Kirk, Caiden Moffett, Sawyer Kirk, Alex Moffett, Maddie Moffett, Nash Kirk and Chapman Kirk. The Celebration of Life ceremony for Barry will be held at Antioch Church of Christ in Frankfort on Saturday, December 18, 2021, at 2:00 pm, where he was a devoted member for the past five years. The celebration will be officiated by Pastor Dan Luttrell. The family request that attendees to the ceremony please bring a dish for a gathering directly following the service. In lieu of flowers, expressions of sympathy may be made to Antioch Church of Christ. Arrangements are under the direction of Harrod Brothers Funeral Home & Crematory.

Barry Kirk, 74, of Frankfort Kentucky passed away on December 7th, 2021 surrounded by his family and friends. He was born to parents Edward Franklin Kirk and Dorthy Lorraine Botkins, on August 24th, 1947, in Frankfort, Kentucky. Barry graduated... View Obituary & Service Information

The family of Barry Kirk created this Life Tributes page to make it easy to share your memories.

Barry Kirk, 74, of Frankfort Kentucky passed away on December...