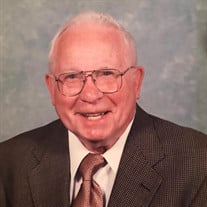 Frankfort – Ben Barlow, Jr., age 92, passed away at home on Wednesday, July 29, 2020. Services will be held at Harrod Brothers Funeral Home on Monday, August 3, 2020, at 11:00 a.m. with Rev. Josh Rayborn officiating. Burial will follow at Sunset Memorial Gardens. The family will receive friends at Harrod Brothers Funeral Home from 2:00 p.m. until 5:00 p.m. on Sunday, August 2, 2020. Mr. Barlow was born in Liberty, Kentucky, on August 27, 1927, to the late Benjamin Franklin Barlow and Alberta Smith Barlow. He retired from Frankfort Meter and Electric Company after serving as a meter tester for over 50 years. He was a Veteran of the United States Army during the Korean War era and a member of The Old Guard and American Legion. In addition, he was a Kentucky Colonel. Mr. Barlow was a craftsman, especially spending time working on clocks and picture frames. He loved to travel, loved a good meal, but mostly enjoyed time spent with his family. He is survived by his children, David Wayne Barlow; Michael Dowling Barlow (Joyce Rayborn); Susan Lynn McNees (Michael); Joan Marie Luther (Martin Ray); and Roger Alan Barlow; brother, Edward Barlow; grandchildren, John Barlow, Sarah Barlow, Daniel Barlow (Sarah Hopper), Steven Barlow (Caitlin Amburgey), Alex Luther, Joshua Barlow (Britney), and Anna Barlow Lynn (David Joshua); and by 7 great-grandchildren. He was also blessed with many nieces and nephews. In addition to his parents, he was preceded by his wife of 51 years, Mary Catherine “Kitty” Dowling Barlow; grandson, Michael David McNees, Jr.; daughter-in-law, Regina Barlow; and by 8 siblings. Serving as pallbearers will be family and friends. In lieu of flowers, expressions of sympathy may be made to the American Heart Association and the Alzheimer’s Association. Arrangements are under the direction of Harrod Brothers Funeral Home & Crematory.

The family of Ben Barlow Jr created this Life Tributes page to make it easy to share your memories.