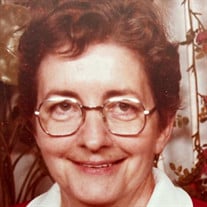 Bettie Sue Clinkenbeard Mefford, was born in Nicholas County on May 24, 1928 and died peacefully at her home on April 18, 2021, one month shy of her 93rd birthday. She was greatly loved by her family and friends and will be missed dearly. She was preceded in death by her parents, Ruben and Lizzie Mae Clinkenbeard, brothers Dudley and Sam Clinkenbeard and sister Doris Hamm and by her husband of 52 years, Austin Mefford. Bettie grew up in Nicholas County and graduated from Carlisle High School. She then moved to Lexington with roommates Irene Mefford, Marjorie Mefford and Frances Alexander. The Mefford girls introduced her to their brother, Austin, the love of her life. They were married on February 28, 1948, and started a family on a farm in Scott County. More children arrived and they ultimately moved to the Peaks Mill community in Franklin County. Although she wanted nothing more than to be the traditional farm wife, small farms not being very lucrative, she took a position as a clerk for the Franklin County ASCS office. She loved interacting with the farmers of Franklin County and grew to count them all as friends. She knew the details of their farms, their tobacco allotments, their diverted acres, and details of their families, their children, relations through marriage……she was an encyclopedia of Franklin County agriculture information. She had a career for 31 years with what became the Farm Service Agency of Franklin County, retiring as the County Executive Director, a reluctant feminist. Although she received many awards over the years from county and state agricultural agencies, these were never displayed in her home. Instead, her walls and counters were filled with pictures of her family, children, grandchildren and great grandchildren……her real accomplishment! Always active in her church, her home church Oakland Christian, and recently Peaks Mill Christian, she served as Sunday school teacher, youth leader and Bible Bowl coach for many years, touching the lives of many, all of whom she loved dearly. She is survived by her three children, Olin Mefford (and wife Linda), Ivan Mefford (and wife Ruth) and Diana Mefford Hogan (and husband Rick); grandchildren, who were so very special to her, Melissa Duff, Michael Mefford, Alison Parker, Kevin Mefford, Shea Malhotra, Dana Parker, Caitlin Schlakman, Lindsay Carter, Brette Conliffe, Eric Mefford, Tyler Mefford and Kelly Hogan; 20 delightful great grandchildren and numerous nieces and nephews that were also so special to her. Services at Harrod Brothers Funeral Home, with visitation on Wednesday, April 21 from 5:00 p.m. until 8:00 p.m., and funeral at 10 am on Thursday, April 22. Burial will follow at Peaks Mill Cemetery. Her grandchildren serve as pallbearers and her great-grandchildren as honorary pall bearers. Flowers are welcome, but expressions of sympathy may be made to the Peaks Mill Cemetery Fund. Arrangements are under the direction of Harrod Brothers Funeral Home & Crematory.

Bettie Sue Clinkenbeard Mefford, was born in Nicholas County on May 24, 1928 and died peacefully at her home on April 18, 2021, one month shy of her 93rd birthday. She was greatly loved by her family and friends and will be missed dearly. She... View Obituary & Service Information

The family of Bettie Sue Mefford created this Life Tributes page to make it easy to share your memories.