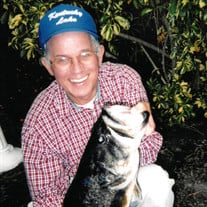 Frankfort – Robert “Bob” William Gilbert, age 79, passed away on Thursday, May 13, 2021. A Celebration of Life will be held at Forks of Elkhorn Baptist Church on Monday, May 17, 2021, at 7:00 p.m. with Rev. Todd Lester and Rev. Josh Rayborn officiating. A gathering of family and friends will be held at Forks of Elkhorn Baptist Church from 4:00 p.m. until 7:00 p.m. on Monday. Bob was born in Frankfort on October 7, 1941, to the late James W. Gilbert and Margaret Slaughter Gilbert. He worked in marketing for AT&T for 15 years and was the owner of Gilbert’s Furniture for 33 years. Following retirement, Bob went to work with his son, Troy, building properties. After his second retirement, he and Debbie loved spending their winters in Florida with their many friends cruising and boating on the lakes. He even took his mother-in-law and taught her how to catch crappie – she thought he did no wrong. Bob was a member of Forks of Elkhorn Baptist Church and a Veteran of the United States Navy. He enjoyed fishing on the Kentucky Lake, Taylorsville Lake and in Florida with his son, Brent, and his grandchildren. He is survived by his beloved wife of 54 years, Debbie Clark Gilbert; son, Brent Gilbert; and grandchildren, Taylor Gilbert, Sarah Gilbert, Makayla Gilbert, and Wade Gilbert. In addition to his parents, he was preceded in death by his son, Troy Gilbert; brothers, Jim Gilbert and Leslie Gilbert; and grandsons, Mason and Ethan Gilbert. In lieu of flowers, expressions of sympathy may be made to Forks of Elkhorn Baptist Church Youth Program or a charity of one’s choice. Arrangements are under the direction of Harrod Brothers Funeral Home & Crematory.

The family of Bob Gilbert created this Life Tributes page to make it easy to share your memories.