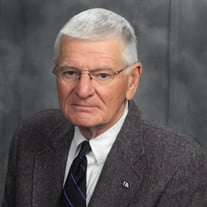 Frankfort – Bobby Charles Whitaker, age 85, husband of the late Julia Ann Hayden Whitaker, passed away Friday, February 11, 2022. Graveside services will be held at St. Joseph Cemetery in Bardstown, Kentucky on Wednesday, February 16, 2022, at 10:00 a.m. with Dr. Jack Brewer. Visitation will be held at Harrod Brothers Funeral Home from 4:30 p.m. until 7:30 p.m. on Tuesday, February 15, 2022. A native of Cadiz, Kentucky, he was the son of the late Charles and Jettie Townsend Whitaker. He was a graduate of Bardstown High School, where he was a three-sport athlete. He graduated from the University of Kentucky College of Journalism and was a member of the Pi Kappa Alpha fraternity and the ROTC. Early in his career he worked for the Cynthiana Democrat Newspaper, and was co-owner of M. Goldberg’s Mens’ Clothing Store. He served in Governor Wendall Ford’s Cabinet as Commissioner of the Department of Public Information. He was Executive Director of the Kentucky Bicentennial Commission. He finished his career with the University of Kentucky as the Executive Director of the National Alumni Association, retiring after 24 years of service. In addition, he was a member of the First United Methodist Church in Frankfort. A Veteran of the United States Army, he also served in the Army Reserves 100th Division and the Kentucky National Guard, retiring with the rank of Major. His work allowed him to travel across Kentucky and the country where he never met a stranger. He said he had good friends in every county of the state. He enjoyed traveling the world with the Alumni Travel Program. He especially loved traveling to numerous UK football and basketball games including 7 Final Four games. He was an avid golfer, loved a good book, and enjoyed a fine bourbon. His greatest joy was spending time with his family and friends, especially his grandchildren and hanging out with his four-legged buddy “Baxter.” He is survived by his son, Mike Whitaker; his daughter, Kim Wilkerson and her husband, Lewis; grandchildren, Emily Wilkerson and Hayden Wilkerson; his sister, Peggy Whitaker Powell; nephew, Tom Powell, Jr. In addition to his wife and parents, he was preceded in death by his niece, Dr. Lisa Powell, DVM. Serving as pallbearers will be Mike Whitaker, Lewis Wilkerson, Hayden Wilkerson, Emily Wilkerson, Alden Gatewood, and Steve Criswell. Honorary pallbearers will be Cleland White, Homer Schirmer, Paul McNees, Stan Key, Bernie Vonderheide, and the past presidents of the UK Alumni Association. In lieu of flowers, expressions of sympathy may be made to First United Methodist Church Building Fund, 211 Washington Street, Frankfort, Kentucky 40601; the University of Kentucky designated for the Bob Whitaker Scholarship Fund, send to the UK Alumni Association; attn: Bob Whitaker Scholarship, King Alumni House, 400 Rose Street, Lexington, Kentucky 40506-0119; or Bluegrass Hospice Care. Arrangements are under the direction of Harrod Brothers Funeral Home & Crematory.

The family of Bob C. Whitaker created this Life Tributes page to make it easy to share your memories.