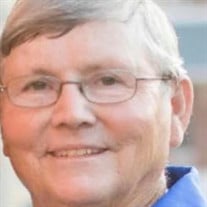 Frankfort – Carlon Wayne Bickers, age 71, passed away on Thursday, February 3, 2022. Services will be held at Harrod Brothers Funeral Home on Friday, February 11, 2022, at 10:30 a.m. with Pastor Daniel Wilson officiating. Burial will follow at Frankfort Cemetery. The family will receive friends at Harrod Brothers Funeral Home from 5:00 p.m. until 8:00 p.m. on Wednesday, February 9, 2022, and on Thursday, February 10, 2022. Lovingly known as “Butterball” by many, Carlon was born in Frankfort on March 27, 1950, to the late Robert Melwood Bickers and Betty Jean Kuhn Sutton. He was a 1969 graduate of Frankfort High School and attended Kentucky State University, University of Tennessee and Eastern Kentucky University. Carlon retired from the Kentucky State Department of Highways after 34 years of service. He was a longtime supporter of the Frankfort High School Athletics program where he coached Frankfort High School football for many years alongside Raymond Webb and others. He served time coaching wrestling at Frankfort High School where he was known for his famous workout “Bickersize.” In addition, he was a black belt in Chito – KAI. As an avid fan, enjoyed UK Football games and held season tickets for over 20 years and also enjoyed watching LV Raiders and Green Bay Packers, and MLB St. Louis Cardinals games. Carlon loved to walk or jog as a part of his daily workout routine. Known as a man that never was at a loss for words, he loved to talk and fellowship with everyone he came in contact with. He was a faithful and lifetime member of First Apostolic Church of Frankfort. He had special bonds with many youths and became more than just a coach to most. He was a father figure to so many. He enjoyed his family more than anything else, especially being with his grandchildren. He is survived by his beloved wife of 52 years, Sheila Ann Bickers; children, Michael Wayne Bickers and Jaclyn Bickers Roth (Stephen); grandchildren, Kyler, Corynn, Easton, Carter, and Kerringten. He was also blessed with nieces, nephews, and friends; as well as lifetime friends, Mike Harrod, Don and Ruth Maxey of California; and two additional “grandkids” Katherine King and Christopher Lopez. Serving as pallbearers will be Michael W. Bickers, Kyler Richie, Stephen Roth, Shane Smith, Marty Redmon, Robin Kuhn, David Kuhn, Mark, Loy, Leon Redmon, Mike Harrod, Bill Moore, and Raymond Webb. Honorary pallbearers will be Daniel Redmon, John Redmon, Dewayne Redmon, Floyd T Quire, Greg Mikllavcic, Greg Moore, James Young, Thomas Wideman, Kevin Loy, Easton Richie, John Sykes, John Harris, Raymond Bickers, Former FHS Football Players and Wrestlers that were coached throughout the years by Coach Bic Livestreaming of the services will be available on Friday, February 11, 2022, after 10:30 a.m. via www.harrodbrothers.com/service-videos Arrangements are under the direction of Harrod Brothers Funeral Home & Crematory.

The family of Carlon W. "Butterball" Bickers created this Life Tributes page to make it easy to share your memories.