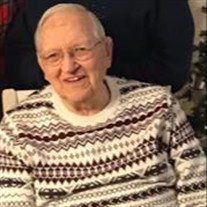 Frankfort – Carlton Everett Murray Winters, age 89, passed away at home on Tuesday, December 1, 2020. Private services will be held with Rev. Todd Lester officiating. Rev. Winters was born in Williamsport, Pennsylvania, on June 23, 1931, to the late Joseph Francis Winters and Winnifred Grace Riggle Winters. He served as a minister for over 60 years. He is survived by his beloved wife of 60 years, Shirley Fogle Winters; daughters, Leigh Anne Grubb (Joe) and Susan Herndon (Chris) and his grandchildren, Meredith Alexander, Caroline Alexander, and Cole Herndon. In addition to his parents, he was preceded in death by his six siblings. Serving as pallbearers will be Dan Arnold, Larry Bell, Kenny Winkle, John Hawkins, Bill Brown, and David Vaughn. Honorary pallbearers will be Gary Bault, Sam Harper, Earl Gardner, Saresh Saxena, Don Embry, Tom Jones, Joseph Grubb, and Christopher Herndon. Livestreaming of services will be available for viewing on Monday, December 14, 2020, after 11:00 a.m. via www.harrodbrothers.com/service-videos. In lieu of flowers, expressions of sympathy may be made to Bluegrass Hospice Care or Forks of Elkhorn Baptist Church. Arrangements are under the direction of Harrod Brothers Funeral Home & Crematory.

The family of Carlton Everett Winters created this Life Tributes page to make it easy to share your memories.