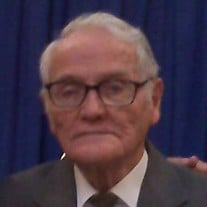 Charles F. Hinds, Kentucky state librarian from 1969 to 1979, died August 14th in Florence, Kentucky. Mr. Hinds served seven Kentucky governors from Benjamin “Happy” Chandler to John Y. Brown. Mr. Hinds is survived by his wife, Doris R. Hinds of Florence; his son, Joe Hinds of Florence, Ky; his grandson, John Hinds in Davidsonville, Md; and his great granddaughters, Sarah and Catherine Hinds also in Davidsonville, Md. Mr. Hinds was Director of the Kentucky Historical Society from 1960 to 1963 and then he served as the first Director of the Kentucky Archives and Records Service from 1963 to 1967. He also was the Director of the Libraries at Murray State University from 1967 to 1969. Sgt Hinds and his son, Lt Col Joe Hinds, were the first father-son combination inducted into the Kentucky Veterans Hall of Fame in 2015. Sgt Hinds served in the 2nd Armored Division under Gen George Patton during WWII in the eastern front. He was in combat in seven campaigns for over three years, living outdoors in a hostile environment, going from freezing to blistering temperatures and getting fired on by Germans most days. He said, “I was just doing my job.” Sgt Hinds was a Prisoner of War captured in the North African campaign. When asked about his POW treatment, he said, “I was just doing my job.” On one of his few leaves in France, his company was wiped out when they overran a German Panzer division. Out of his original company, he was the only survivor. He said, “I was just doing my job.” He wrote his first book, “I Was a Patton Trooper,” about these experiences. He also wrote books on the First Baptist Church and the Episcopal Church of the Ascension, both in Frankfort. He received his BA with a Phi Beta Kappa award and a MA in both history and library science from UK. He served the Frankfort community for over six decades as a member of Rotary, Optimist, Veterans of Foreign Wars, and Toastmasters clubs. He also served the state of Kentucky organizing state tennis tournaments and participating in the Sons of American Revolution, Jamestown Society, and Dames clubs. He was a member of the Ascension Episcopal Church. Services for Mr. Hinds will be held at Harrod Brothers Funeral Home on Wednesday, August 21, 2019, at 10:00 a.m. Rev. Charles Ellestad will officiate assisted by Rev. James Baughman. Burial with military honors will follow at Frankfort Cemetery. The family will receive friends at Harrod Brothers Funeral Home Tuesday, August 20, 2019, from 5:00 p.m. until 8:00 p.m. Pallbearers will be Don Gutermuth, Jeff Gutermuth, Dan Rooney, Larry McDonald, Gary McDonald, Jim Rooney, Rev. James Baughman and Dr. Henry Baughman. Arrangements are under the direction of Harrod Brothers Funeral Home.

The family of Charles F Hinds created this Life Tributes page to make it easy to share your memories.