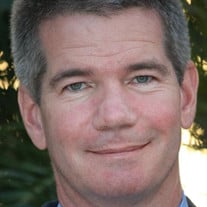 Frankfort - Charles Louis Willis, Jr. “Chuck” passed away on December 22, 2019. Services will be held at Harrod Brothers Funeral Home on Friday, January 3, 2020, at 2:00 p.m. with Rev. Deacon Sue Kurtz officiating. Burial will follow at Frankfort Cemetery. The family will receive friends at Harrod Brothers Funeral Home from 12:00 p.m. until 2:00 p.m. service time on Friday. Chuck was born in Lexington, Kentucky on December 20, 1961. He grew up in Frankfort, and attended Franklin County High School and the University of Kentucky, where he was a member of Sigma Alpha Epsilon. He was retired from the Kentucky State Government Cabinet for Economic Development, and lived in Louisville at the time of his death. Chuck is survived by his sons Dawson Willis and Andrew “Drew” Willis, as well as by his father, Charles Louis “Buddy” Willis of Vero Beach, Florida, and his sister, Lee Willis Morris (Andrew), of Arlington, Virginia. He is also survived by his nephews William, Jack, and Dominic Morris. Chuck was preceded in death by his mother, Barbara Dawson Willis. Pallbearers will be Dawson Willis, Andrew Willis, William Morris, Jack Morris, Dominic Morris, and Michael Dudgeon. In lieu of flowers, expressions of sympathy may be made to the Church of Ascension, 311 Washington Street, Frankfort, Kentucky 40601. Arrangements are under the direction of Harrod Brothers Funeral Home.

The family of Charles L. "Chuck" Willis Jr created this Life Tributes page to make it easy to share your memories.