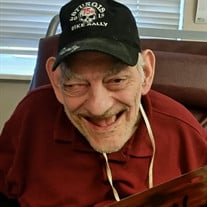 Frankfort – Charley North, age 87, passed away Monday, August 5, 2019. Services will be held at Harrod Brothers Funeral Home Monday, August 12, 2019 at 12:00 p.m. with Rev. Mike Napier officiating. Visitation will be held at Harrod Brothers Funeral Home from 10:00 a.m. until 12:00 p.m. service time on Monday. Charley was born in Hyden, Kentucky, on April 2, 1932, to the late Thomas North and Julia Fields North.. Lovingly known as the “Mayor of Bradford Square,” he enjoyed spending time with family and friends, and especially enjoyed meeting new people. He had a special love for music, his family, and animals. In addition to his parents, he was preceded in death by his siblings, Ruby Wooten, Gay Metzger, Gertrude Baker, Essie Napier, and Perry, Rex, Henry and James North. He is survived by many nieces and nephews, as well as numerous wonderful friends. Serving as pallbearers will be Stephen Parido, Jason Parido, Kaden Sipe, Scott Loechel, Madison Parido, and Jerry Napier. In lieu of flowers, expressions of sympathy may be made to Bluegrass Hospice Care. Arrangements are under the direction of Harrod Brothers Funeral Home.

The family of Charley North created this Life Tributes page to make it easy to share your memories.