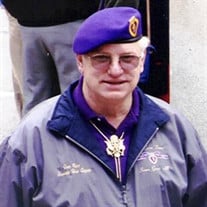 Frankfort – David Burton “Dave” Price, age 77, passed away on Monday, July 15, 2019. Services will be held at Harrod Brothers Funeral Home on Monday, July 22, 2019, at 10:00 a.m. with Mr. John Agenbroad officiating. Burial will follow at Sunset Memorial Gardens. The family will receive friends at Harrod Brothers Funeral Home from 2:00 p.m. until 5:00 p.m. on Sunday, July 21, 2019. Dave was born in Majestic, Kentucky, on January 12, 1942, to the late Henry Burton and Marguerite Webb Price. As an honorable Veteran, he retired from the United States Army, after serving during the Vietnam War. During his service in the military, he received numerous honorable awards including two Purple Hearts, Bronze Star w/ V, and Army Commendation Medal. In addition, he retired from the Kentucky State Government. Dave was a member of the VFW Post 4075, American Legion Post 7, and the local D.A.V. In his spare time, he enjoyed woodworking and telling stories with his Army buddies. He was an outgoing, friendly man, who never met a stranger. He is survived by his wife, Kathy Diane Strange Price; children, Michelle Elder (Eric), Danielle DuVall, and Dustin Strange (Shelley); grandchildren, Aaron, Jeremy, and Logan Ruff, Jacob Semones, Jonathon, Makenna, and Baylie Elder, and Ella Grace Strange. He was also blessed with extended family. In addition to his parents, he was preceded in death by his grandson, Charles Allen “Charlie” Semones and brother, Phillip Young. Serving as pallbearers will be his family and friends. Honorary pallbearers will be the members of the VFW Post 4075, American Legion Post 7, and D.A.V. Arrangements are under the direction of Harrod Brothers Funeral Home.

The family of David "Dave" Price created this Life Tributes page to make it easy to share your memories.