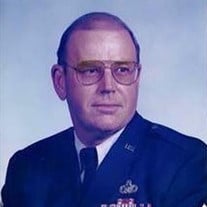 CMsgt (R) Davis G. Sweasy, 77 old years moved on to be with our Lord Jesus Christ on October 3, 2019. Born June 8, 1942 in Mercer County, Kentucky, Chief Sweasy was a 30- year Air Force Veteran, a loving husband, father and grandfather. Davis was kind, had a good sense of humor and will be greatly missed by his family and scores of good friends. He enjoyed going to church, gardening, bowling, traveling and going on cruises all over the world. His footprint here will forever be missed as he had touched so many people’s lives all over the world with his selfless actions. Graveside services will be held at Frankfort Cemetery on Saturday, October 12, 2019, at 9:30 a.m. with Father Charles Howell officiating. Visitation will be held at Harrod Brothers Funeral Home from 8:30 – 9:30 a.m. on Saturday. He is survived by his beloved wife of 50 year, Purita M. Sweasy; son Almer Sweasy; three daughters, Vilma Heredia (son in-law, Jose Heredia), Amilyn Wells (son in-law, Robbie Wells), Maila Myers (son in-law Henry Myers), three granddaughters, Shaylin and Shyann Heredia, Lilly Rose Alvarado and a grandson Patrick Henry Myers. A daughter, Jana Rachel Thompson and a grandson. Armand Paul Guerrero. He is also survived by his brother, Owen Sweasy and his family; sister, Libby, brother in-law, George Hellard and their family; brother, Bill Sweasyand his family and several nieces and nephews. He was preceded in death by his father, Kelly Sr. and mother, Celesta B. Sweasy. He was also preceded by his daughter, Louise Marie Sweasy; a sister, Mary Lou Morris, Kelly Jr., Forrest and Carrol Ray Sweasy. Arrangements are under the direction of Harrod Brothers Funeral Home.

The family of Davis Glenn Sweasy created this Life Tributes page to make it easy to share your memories.