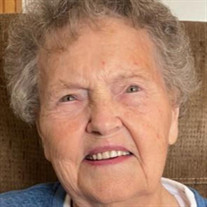 Frankfort &#8211; Dorothy Baker Robertson Cooper, age 93, went home to be with her Lord on Sunday, October 3, 2021 when she passed away peacefully in her sleep. Services will be held at Searcy & Strong Funeral Home in Booneville, Kentucky on... View Obituary & Service Information

The family of Dorothy Baker Robertson Cooper created this Life Tributes page to make it easy to share your memories.