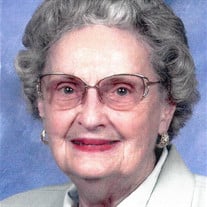 Frankfort – Edna Atha Quire, 101 years young, passed away on Thursday, October 10, 2019, at the Neighborhood in Somerset, Kentucky. A Celebration of Life will be held at the Forks of Elkhorn Baptist Church in Midway, Kentucky, on Monday, October 21, 2019, at 3:00 p.m. with Rev. Todd Lester officiating. Burial will follow at Sunset Memorial Gardens. The family will receive friends at Forks of Elkhorn Baptist Church from 12:00 p.m. until 3:00 p.m. service time on Monday. Edna was born in Owen County to the late Homer Charles Atha and Mary Alice Davis. She was preceded in death by her husband, Louis Winfred Quire; her siblings, H. Charles Atha, Eugene D. Atha, Clara Wise; and Lillian Grimes. She is survived by one son, Winfred C. Quire (Joyce); three grandchildren, Cynthia Q. Henry (Mark), David C. Quire, Brian S. Quire; four great grandchildren, Matthew Henry (Dawn), Nicholas Henry, Sarah Henry, John Quire; and one great-great grandchild, Charles Benjamin Henry. She was also blessed with several nieces and nephews. She was a member of Forks of Elkhorn Baptist Church and a former member of Memorial Baptist Church. She worked in State Government for 25 years and retired in 1980. She was a member of the Flying Solos. In her earlier days, she enjoyed entertaining and cooking for her family and friends. She was an adamant UK basketball fan. A special thank you to Sharon Reynolds and the staff at The Neighborhood for their wonderful care given to her over the past seven years. She loved the staff and they loved her. We highly recommend the Neighborhood because of their care, compassion, and love always shown to their residents. Serving as pallbearers will be Brian S. Quire, John C. Quire, Dr. Mark A. Henry, Matthew Henry, Nicholas Henry, and Sam Brawner. Honorary pallbearers will be David C. Quire, Cynthia Q. Henry, Sarah Henry, Charles Benjamin Henry, Dawn Henry, Steve and Wanda Atha, Terry and Janice Heichelbech, and Mike Atha. In lieu of flowers, expressions of sympathy may be made to the American Cancer Society or the Forks of Elkhorn Baptist Church Building Fund. Arrangements are under the direction of Harrod Brothers Funeral Home.

Frankfort &#8211; Edna Atha Quire, 101 years young, passed away on Thursday, October 10, 2019, at the Neighborhood in Somerset, Kentucky. A Celebration of Life will be held at the Forks of Elkhorn Baptist Church in Midway, Kentucky, on Monday,... View Obituary & Service Information

The family of Edna Atha Quire created this Life Tributes page to make it easy to share your memories.