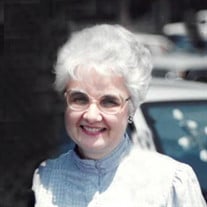 Evelyn Jane Stoll Penn died peacefully on April 2, 2022, following a severe stroke. Evelyn enjoyed good health for most of her life. She liked to live clean; she didn’t drink, smoke, cuss, gamble or gossip. She was smart, tough, independent, multi-talented & hard-working; she loved her family and friends. She brought just the right mix of common sense and humor into every situation. Evelyn was a wonderful mother. Born May 31, 1934, to Warren Benjamin Stoll and Mildred Lindsay Stoll, Evelyn grew up in Chevy Chase, MD & graduated with honors from Bethesda-Chevy Chase High School. At 18 she wed her high school sweetheart Roger Penn (deceased.) The newlyweds lived in Albuquerque, NM, where Evelyn was a civilian draftsperson at Sandia Lab. Then they moved to Lagos, Nigeria, where Roger helped the locals start a public radio station. They returned to the US, bought a house in McLean, VA in 1959 & had a daughter, Leslie Penn (Laird) the next year. They went to Iowa City, IA, where Roger earned his PhD in Communications, then came back to McLean for Leslie to start school. Evelyn created stitcheries, quilts & clothing. She was in a quilting group that traveled to Australia & New Zealand to learn about the traditional quilting methods used there. After she and Roger divorced in 1972, Evelyn attended George Mason U. in Fairfax, VA, while at the same time running a tailoring business out of her home, sewing clothes late into the nights for the McLean ladies. She graduated Magna Cum Laude with a BS in Psychology. Next she worked as Personnel Manager for Equitable Life Insurance Company in Tysons Corner, VA. Then she was Circulation Manager for USA Today in Rosslyn, VA. Her last job was with National Industries for the Severely Handicapped, now known as SourceAmerica, based in Vienna, VA. As a retiree, she sewed many beautiful quilts. Her other favorite hobbies were gardening & reading. In 2016 she sold her house to move to Frankfort, KY, near her daughter. She lived at Capital Plaza Hotel for five years, where she liked taking walks downtown & eating lunch outdoors with Leslie at CoffeeTree Café & Mi Fiesta. With the onset of dementia, Evelyn needed extra care, so she moved to Dominion Senior Living in 2021, where she especially enjoyed bingo, jigsaw puzzles & cake with her new friends. The family sends love and appreciation to her friends & helpers in those last months, with special thanks to Janice Taylor & Mary West. Evelyn is survived by her daughter Leslie Penn Laird & son-in-law Jeffrey McCall Laird. A small private Celebration of Life will be held in May, with arrangements care of Harrod Brothers Funeral Home & Crematory. Donations may be made in her memory to Alzheimer’s Foundation of America, Bluegrass Hospice Care or Franklin County Humane Society.

The family of Evelyn Penn created this Life Tributes page to make it easy to share your memories.