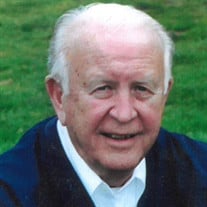 Frankfort- Jack Harden Hoover, loving husband and father, passed away on Sunday, January 24, 2021. He was born in Frankfort, Kentucky, on February 8, 1931, and died two weeks short of his 90th birthday. Jack was one of six children born to Ruth Harden and Stephen Edgar Hoover. He was preceded in death by mother, father, and five siblings, Margaret (Wilson Birkla), Richard E. (Margaret Thatcher), Juanita (James McDonald), Compton G. (Etta Hamilton), and Xandra (E. Gaines Davis). He is survived by his wife, Karen; son, Taylor H. Hoover (Missy Crowe); daughter, Meaghan (William M. Barnett IV); four grandchildren, William M. Barnett V, Michal Barnett, Jack Nelson Hoover, Hayden H. Hoover; and four devoted nieces, Donna Sue Piland, Ruth Davis, Marietta Caudill, and Anne Brown. He was a proud father and grandfather. Jack graduated from Elkhorn High School in 1950. He entered the University of Kentucky that fall. When the Korean Conflict began late that year, he joined the United States Airforce January 1, 1951, with the desire of becoming a pilot. He became a cadet in 1953, and graduated flight school in 1954, as a fighter pilot out of Travis Air Base, Victoria, Texas. As the Korean Conflict was winding down by this time, he did not see fighter experience, but he did have many interesting flights. He was one of 16 F-100 Jet Fighters to fly for the first time out of Newfoundland non-stop, refueling in flight over the Azores and Atlantic Ocean to North Africa. Leaving the service in 1957, he married Karen Malone of Tucson, Arizona, and returned to Kentucky. In 1960 he went to work for William H. May and Tecon-Brighton as a corporate pilot and was privileged to fly many notable people such as Rose Kennedy and her son Robert Kennedy, prior to Jack Kennedy’s election as President of the United States, and also former President Harry S. Truman several times. He began his industrial development career with the Kentucky Department of Commerce, was the Executive Director of The Kentucky Development Finance Authority, did industrial marketing for Hartstern-Schnell Architects of Louisville, and joined the late Katherine Peden in real estate development. He worked eight years for Farmers Bank, representing the bank and the Franklin County Development Foundation. Through them he was very much responsible for the development of the Franklin County Industrial Park at US 60 and Duncan Road for which the Fiscal Court honored him by naming the access road Hoover Boulevard. He was then instrumental in locating several employers in the park such as Topy Corp., OHI America, and Montaplast, the Kentucky Teacher’s Association headquarters on Versailles Road, as well as others. He was associated with the partnership to purchase and refurbish the former Central Screw Building, now occupied by Meritor Corporation. In his early adult years, he was a Deacon in the First Christian Church and a member of the Frankfort Masonic Lodge, Jaycee’s and Rotary Clubs. He loved reading about airplanes and old automobiles. There will be no service at this time. In lieu of flowers, friends may choose to donate to the Franklin County Humane Society Building Fund or Bluegrass Care Navigators (Hospice). Arrangements are under the direction of Harrod Brothers Funeral Home & Crematory.

Frankfort- Jack Harden Hoover, loving husband and father, passed away on Sunday, January 24, 2021. He was born in Frankfort, Kentucky, on February 8, 1931, and died two weeks short of his 90th birthday. Jack was one of six children born to Ruth... View Obituary & Service Information

The family of Jack Harden Hoover created this Life Tributes page to make it easy to share your memories.