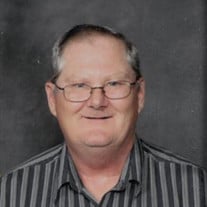 Frankfort - Jackie Lewis Taylor, age 63, passed away on Friday, March 5, 2021. Services will be held at Harrod Brothers Funeral Home on Thursday, March 11, 2021, at 2:00 p.m. with Rev. David Smith officiating. Burial will follow at Sunset Memorial Gardens. The family will receive friends at Harrod Brothers Funeral Home from 12:00 p.m. until 2:00 p.m. service time on Thursday. Jackie was born in Frankfort, Kentucky on February 5, 1958, to the late Wandell Delanore Taylor and Alene True Montgomery Boler. He was a Veteran of the United States Army. Jackie was an avid University of Kentucky fan. In his spare time, he enjoyed playing the drums and pinball. He is survived by his siblings, Douglas Taylor (Edna) and Tina Boler Bates. He was also blessed with several nieces and nephews. In addition to his parents, he was preceded in death by his siblings, Roger Dale Parrish, Tony Boler, Glenda Murphy, Pamela Avery, and Teresa Stanley. Serving as pallbearers will be Charles Parker, Brian Blankenship, Freddie White, Doug Thomas Taylor, Eddie Hortenbury, and Tony Thompson. The honorary pallbearer will be Trey Troxell. In lieu of flowers, expressions of sympathy may be made to Bluegrass Hospice Care. Arrangements are under the direction of Harrod Brothers Funeral Home & Crematory.

The family of Jackie Taylor created this Life Tributes page to make it easy to share your memories.