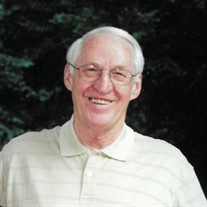 Frankfort – James Olen Hurt, age 77, passed away at home on Tuesday, October 23, 2018. Services will be held at Harrod Brothers Funeral Home on Friday, October 26, 2018, at 11:00 a.m. with Rev. Jon Sutphin officiating, assisted by Rev. Sherman Warfield. Burial will follow at Frankfort Cemetery. The family will receive friends at Harrod Brothers Funeral Home from 5:00 p.m. until 8:00 p.m. on Thursday, October 25, 2018. Mr. Hurt was born in Hazard, Kentucky, on February 10, 1941, to the late James Rudolph and Eliza Mae Grigsby Hurt. A 1959 graduate of M.C. Napier High School in Hazard, he went on to retire as a sales representative from Nabisco Brands and Kroger. He was a long-time self-employed cattle farmer, and truly had a passion for it. He was an avid University of Kentucky basketball fan and a former youth baseball and basketball coach in Frankfort. He was a member of Captial City Christian Church and the Elks Lodge No. 530. In addition to his parents, he was preceded in death by his sister, Velora Hurt. He is survived by his children, Karla Brown (Tim) of Frankfort, David Hurt (Rochelle) of Frankfort, and Mark Hurt (Jennifer) of West Virginia; siblings, Glenna Kaye Dixon (Pete) and Todd Hurt (Michelle), all of Hazard; grandchildren, Bethany Singleton, Eric Brown, Sarah Neal (Jack), Michael Hurt, Elizabeth Shaf, and Nicholas Shaf; and by his special friend of 15 years, Linda Wilson and her daughter, Sharon Spencer (Mike); by two special aunts and numerous nieces and nephews. He was also blessed with many wonderful friends. Serving as pallbearers will be Eric Brown, Michael Hurt, Nicholas Shaf, Jack Neal, David Colwell, and Mike Spencer. Honorary pallbearers will be Robert Tudor, Ricky Groves, Joe Singleton, and John Sherrard. In lieu of flowers, expressions of sympathy may be made to Bluegrass Hospice Care or Markey Cancer Center. Arrangements are under the direction of Harrod Brothers Funeral Home.

The family of James Olen Hurt created this Life Tributes page to make it easy to share your memories.