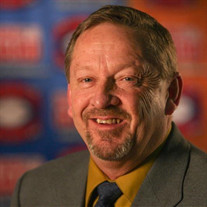 Frankfort -James Coleman “Jc” Newton, age 62, passed away Saturday, October 19, 2019. A Celebration of Life will be held at Capital City Christian Church on Wednesday, October 23, 2019, at 4:00 p.m. with Rev. Jon Sutphin officiating. The family will receive friends at Capital City Christian Church from 1:00 p.m. until 4:00 p.m. on Wednesday. Jc was born in Frankfort on November 26, 1956, to the late Edward Mason Newton, Sr. and Betty Jane Martin Newton. He worked as an Assistant Director of Building Services for the Kentucky State Government Finance Cabinet. In addition to being an honorable Veteran, he retired as the Marketing Director of the Kentucky National Guard. A man with servant’s heart, Jc had a special passion for his community and its people. With a love for children, he served as a coach, friend, mentor, and inspiration to the children of this community. With a contagious personality and a selfless, helping heart, he was loved by all whom he met and will be greatly missed. He is survived by his loving wife, Phyllis Dianne Spigle Newton; sons, Jared Mason Newton (Michelle) and Joshua E. Newton; siblings, Teri Kendall-Raney, Ardena C. Newton, and Kim Newton Tompkins (Cliff). He was also blessed with several nieces and nephews. In addition to his parents, he was preceded in death by his brother, Edward Mason Newton, Jr. In lieu of flowers, expressions of sympathy may be made to the Simon House, P.O. Box 5174, Frankfort, KY 40601 or ACCESS Soup Kitchen and Men’s Shelter, 311 W. Second Street, Frankfort, KY 40601. Arrangements are under the direction of Harrod Brothers Funeral Home.

The family of Jc Newton created this Life Tributes page to make it easy to share your memories.