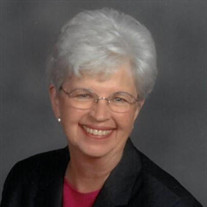 Jean Yowell Farrisee, 88, passed away on September 14, 2020, In Louisville, KY. She was born on January 31, 1932, to Robert L. and Edna Mae Yowell in Schenectady, NY. She was a 1949 graduate of the Albany Academy for Girls, Albany, NY and a 1953 graduate of Mount Holyoke College, South Hadley, MA with a major in psychology. She married Dana G. Farrisee on June 4, 1955. They were married for 24 years until his death in July of 1979. Jean was a longtime resident of Frankfort, KY. She was employed by the Kentucky Department of Medicaid Services for 20 years, beginning as a Section Supervisor and retiring as the Division Director of Program Services. She was an active member of First United Methodist Church in the Sage Sunday School Class and Variety Circle and also served as a Stephen Minister. She was a member of the Frankfort Women’s Club and Frankfort District United Methodist Women. Jean was a dedicated parent volunteer with the Franklin County High School Flyer Band, Frankfort Swim Team and Girl Scouts. Preceding Jean in death were her husband and parents, as well as a brother, Richard L. Yowell, and a grandson, David C. Utz. She is survived by her four children: US Army Colonel (Retired) David Farrisee (Gina), Burke, VA; Beth Utz (Chris), New Albany, IN; Lynne Farner (Alan), Louisville, KY and Scott Farrisee (Lori), South Bend, IN. She is also survived by her grandchildren: Stephen Utz, Katherine O’Hara (Tom), Caroline Utz, Ryan Farrisee, Patrick Farrisee, Sara Farner, Kelly Farner. Her family would like to express their appreciation to the staff at Magnolia Springs East and Hosparus Louisville for their loving care of Jean. Services will be held at Harrod Brothers Funeral Home on Saturday, September 19, 2020, at 1:00 p.m. with Dr. Phil Hill officiating. Burial will follow at Frankfort Cemetery. The family will receive friends at Harrod Brothers Funeral Home from 11:00 a.m. until 1:00 p.m. service time on Saturday. In lieu of flowers, donations may be made to First United Methodist Church, 211 Washington St. Frankfort, KY 40601; Mount Holyoke College, Office of Advancement, 50 College St. South Hadley, MA 01002; or Hosparus Louisville, 3532 Ephriam McDowell Dr. Louisville, KY 40205. Arrangements are under the direction of Harrod Brothers Funeral Home & Crematory. Condolences may be shared via the online guestbook at www.harrodbrothers.com

Jean Yowell Farrisee, 88, passed away on September 14, 2020, In Louisville, KY. She was born on January 31, 1932, to Robert L. and Edna Mae Yowell in Schenectady, NY. She was a 1949 graduate of the Albany Academy for Girls, Albany, NY and... View Obituary & Service Information

The family of Jean Y. Farrisee created this Life Tributes page to make it easy to share your memories.