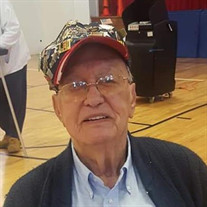 Frankfort – Kenneth Tracy, age 100, passed away peacefully at home on Sunday, April 14, 2019. Services will be held at Harrod Brothers Funeral Home at 1:30 p.m. on Thursday, April 18, 2019, with Mr. Tom Kring officiating. Burial will follow at Sunset Memorial Gardens. Military honors will be observed at the gravesite by the VFW Post 4075. The family will receive friends at Harrod Brothers Funeral Home from 5:00 p.m. until 8:00 p.m. on Wednesday, April 17, 2019, and from 12:30 p.m. until 1:30 p.m. service time on Thursday. Mr. Tracy was born in Frankfort on December 8, 1918, to the late Otto and Carrie Ellen Harrod Tracy. He was united in marriage to his wife of 76 ½ years, Freda Mae Kring Tracy, who also preceded him in death. He retired from Dixie Cream Flour Company and was the former owner and operator of Dixie Cream Donuts. A Veteran of the United States Army, Mr. Tracy was lifelong members of VFW 4075 and American Legion Post 7. He enjoyed attending the Franklin County Senior Activity Center, playing Tonk at the VFW and gardening. A man with an outgoing spirit and a love for people, he was always welcoming of visitors. Above all, he loved his nieces, nephews, and grandchildren dearly. He is survived by his children, Pam Penn (Joe) and Susan Ronca (Bob); grandchildren, Laura Penn, Ashley Brown (Bert), Lindsey White (Dom), Amanda Ronca, and Julie Terrell; and great-grandchildren, Joseph Penn-Simpson, Jacob Penn-Simpson, Cameron Terrell, Tiffany Lay, Jama Blythe, and Michi Blythe. He was also blessed with many nieces and nephews. In addition to his wife and parents, he was preceded in death by his siblings, Otto Tracy, Douglas Tracy, and Cordie Conway. Serving as pallbearers will be family and friends. Honorary pallbearers will be his great-grandchildren. In lieu of flowers, expressions of sympathy may be made to the Franklin County Senior Activity Center, 202 Medical Heights Dr, Frankfort, KY 40601. Arrangements are under the direction of Harrod Brothers Funeral Home.

The family of Kenneth Tracy created this Life Tributes page to make it easy to share your memories.