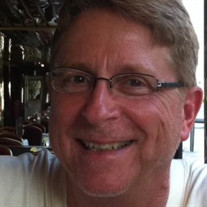 Frankfort- Kerry Wayne Prather, 68, husband of Lisa Hicks Prather, died Friday morning, September 21, 2018, at his residence on Georgetown Road after a two-year illness. Born June 29, 1950, in Cushing, Oklahoma, he was the son of the late Marcus W. Prather and Josephine Draine Prather. As a young boy, Kerry cultivated a passion for fishing that would become his life's career as he watched the television program "Kentucky Afield." He was mentored by the older fishermen along the Chaplin River in Cornishville, Kentucky. Kerry graduated from Mercer County High School in 1968. He was a charter member of the percussion section of the high school band and he represented Mercer County High School at Boy's State during his Junior year. He was president of his Senior Class. In 1969 he started working for the Kentucky Department of Fish and Wildlife Resources as a summer aide, a position he held for seven years. During that time he earned a Bachelor of Science degree from Eastern Kentucky University and a Master's degree in Biological Sciences from Murray State University. During his high school and college years, Kerry was an on-air personality for WHBN Radio Station in Harrodsburg. Kerry began his professional career in the fall of 1977 as the Eastern Fisheries District Biologist in Prestonsburg when the department expanded into districts. He worked in the mountains until 1984 when he was reassigned to the Central Fisheries District in Frankfort as a District Biologist. During his 31 years with the Department for Fish & Wildlife, he worked on the Wild River Project, Lake Barkley Crooked Creek Study, the first State Wild Trout Research Project, the Environmental Assessment for Yatesville Lake, and countless other projects. He authored the department's publication "A Management Guide for Ponds and Small Lakes in Kentucky" as well as other technical leaflets and newspaper articles. Kerry also enjoyed observing the migratory patterns of Kentucky birds as a member of the National Audubon Society Birding Team. In September 2008 Kerry was nominated for the prestigious SEAFWA Fisheries Biologist of the Year Award for his service to the commonwealth. After his retirement, Kerry established a private business, Bluegrass Lake Management, to assist landowners across the state with their farm ponds. His clientele included horse farms in the Bluegrass region such as WinStar. Kerry served as an Elder and Sunday School teacher at Cornishville Christian Church for a number of years. In 1998 he moved his church membership to Capital City Christian Church in Frankfort where he served as an Elder and a member of the church board. Other survivors include: one son, Joseph Marc (Faith) Prather of Frankfort; three step-sons, Aaron (Mandy) Hicks, Martinez, Georgia; Joshua (Katie) Hicks, Lawrenceburg, Ky.; Jacob Hicks, Frankfort, Ky.; one step-daughter, Abby Brynn Gortney, New Orleans, Louisiana; one granddaughter and five grandsons, with a sixth grandson due later this year. One sister, Kandie Prather Adkinson of Frankfort, and his sister-in-law and brother-in-law, Terri & Gary Lyons of Campbellsville, grandchildren, Braxton, Cayleigh, Kolton, Hunter, Kyler, Hayes; Benton on the way; along with numerous nieces, nephews, and cousins. Kerry was especially devoted to Lisa's parents namely his father-in-law, John Peckinpaugh, and his mother-in-law, Rachel Peckinpaugh, both of Campbellsville, Ky. Funeral services will be held Wednesday, September 26, 2018, at 12:00 noon at Capital City Christian Church in Frankfort with Dr. Steve Pattison officiating, assisted by Rev. John Sutphin. Burial will follow at Hillcrest Memorial Park in Lexington. The family will receive friends at the church from 5:00 until 8:00 on Tuesday, September 25,2018, and from 10:00 a.m. until 11:30 a.m. on Wednesday, September 26, 2018. Pallbearers will be Joseph Prather, Aaron Hicks, Joshua Hicks, Jacob Hicks, Travis Adkinson, and Gary Lyons. Honorary Pallbearers will be his family of friends from The Kentucky Dept. of Fish and Wildlife Resources. In lieu of flowers, expressions of sympathy may be made to Capital City Christian Church, 15 Locust Drive, Frankfort, KY 40601. Arrangements are under the direction of Harrod Brothers Funeral Home.

Frankfort- Kerry Wayne Prather, 68, husband of Lisa Hicks Prather, died Friday morning, September 21, 2018, at his residence on Georgetown Road after a two-year illness. Born June 29, 1950, in Cushing, Oklahoma, he was the son of the late Marcus... View Obituary & Service Information

The family of Kerry Prather created this Life Tributes page to make it easy to share your memories.