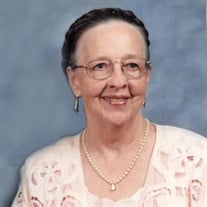 Linda Tyler Overall Bell, age 94, passed away on Friday, February 11, 2022, at her home in the loving company of her children. A native of Lawrenceburg, she was born at home on November 15, 1927, to the late Dr. A.C. and Maude Overall. She was preceded in death by her husband of 65 years, Rev. Earl S. Bell; two sisters, Joyce Weathers and Hazel Ripy; and two brothers, Irvin Overall and John Overall. She is survived by children Carey (Bill) Durrett of Frankfort, Mark (Eva) Bell of Harlan, and Allison Bell of Frankfort; grandchildren Angie (John) Parker of Frankfort, Matthew (Mandy) Durrett of Frankfort, Courtney (Gurpreet) Singh of Lexington, Jeremy (Kaylee) Bell of Harlan, and John Bell of Harlan; great-grandchildren Kaitlyn Parker and Caroline Durrett, both of Frankfort; sisters-in-law Mary Overall of Shelbyville and Jane Larkey of London; as well as several nieces and nephews. Linda was a 1945 graduate of Lawrenceburg High School and earned her Bachelors Degree at Georgetown College on May 31, 1949, graduating in the morning and getting married in the college chapel in the afternoon. She was an accomplished pianist and organist, as well as a beloved and respected teacher for more than 70 years, instructing hundreds of music students in central and eastern Kentucky, as well as in Mississippi, Arizona and Virginia. She also spent her many years in music ministry at several churches, including Hillsboro Baptist in Woodford County, Memorial Baptist in Frankfort, Calvary Baptist in Tucson, Ariz., Harlan Baptist, First Baptist in Pulaski, Va., Calvary Baptist and First Baptist in Frankfort, and North Fork Baptist at Switzer. She often contributed her time as a Sunday School teacher for both adults and children at many of those same churches. Linda also served as an accompanist for community and school choral groups, including the Kentucky All-State Chorus, the Bluegrass Theater Guild, the Harlan Boys Choir, Harlan Musettes, Harlan Community Chorus, Southeast Performing Arts Series, and Franklin County High School Chorus. In the 1980s and 90s, she was employed by the Commonwealth of Kentucky Department of Personnel. Services will be held at First Baptist Church on St. Clair Street, on Wednesday, February 16, 2022, at 1:00 p.m. with Dr. David Hinson, Dr. Keith Felton, and Bro. Jay Stratton officiating. Burial will follow at Frankfort Cemetery. The family will receive friends at First Baptist Church from 11:00 a.m. until 1:00 p.m. service time on Wednesday. Pallbearers will be Gurpreet Singh, Jeremy Bell, John Bell, Matthew Durrett, Asa Overall and John Parker. In lieu of flowers, the family requests donations to the Hawaii Baptist Academy, Office of Institutional Advancement, 420 Wyllie St., Honolulu, HI 96817-1729; or to First Baptist Church, 201 St. Clair, Frankfort, KY 40601. Arrangements are under the direction of Harrod Brothers Funeral Home & Crematory.

Linda Tyler Overall Bell, age 94, passed away on Friday, February 11, 2022, at her home in the loving company of her children. A native of Lawrenceburg, she was born at home on November 15, 1927, to the late Dr. A.C. and Maude Overall. She... View Obituary & Service Information

The family of Linda O. Bell created this Life Tributes page to make it easy to share your memories.