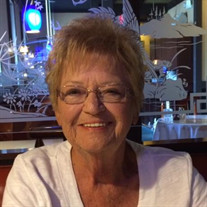 Frankfort – Services for Mae Roberts Girkey will be held at Harrod Brothers Funeral Home on Saturday, March 9, 2019, at 1:00 p.m. with Rev. Mike Napier officiating. Burial will follow at Frankfort Cemetery. The family will receive friends at Harrod Brothers Funeral Home from 4:00 p.m. until 8:00 p.m. on Friday, March 8, 2019, and 11:00 a.m. until 1:00 p.m. on Saturday. She passed away at home on Wednesday, March 6, 2019. Mae was the daughter of the late Elbert “Jack” Roberts and Maymie Lee Roberts. In addition to her parents, she was also preceded in death by her husband, J.C. Girkey, Jr., son, Bradley W. Girkey, and sisters, Marie and Carroll Roberts. She is survived by her son, Mark Girkey, and grandson, Kevin, whom she adored. Mae chose a career in state government because of her desire to help people in need. Twenty-one of her 39 years were spent as an assistant to Thelma L. Stovall during her terms as Secretary of State, State Treasurer, and Lieutenant Governor. She was appointed Director of the Division of Unemployment Insurance by former Governor John Y. Brown, Jr., where she was successful in guiding the development of legislation to restore solvency to a bankrupt UI Trust Fund. Following her retirement from state government, she served as Administrative Secretary to the Kentucky Hairdressers and Cosmetologists Association for 10 years. After 20 years, Mae returned to state government as Office Manager to Governor Steven L. Beshear. In addition, she volunteered as Campaign Treasurer for A.B. Chandler III in his campaign for Attorney General and Campaign Compliance Director in his gubernatorial campaign. She served in the same capacity for the campaign of Governor Beshear. Mae loved the Lord and volunteered as pianist and organist for several Franklin County Churches for 64 years. She was a member of the Choateville Christian Church. A woman of strength, Mae raised her two sons with pride, and supported them of their passions. In her spare time, she enjoyed fishing, and spending time with her family and friends. Serving as pallbearers will be Greg Cary, John Sykes, Sean Rhorer, Billy Hammond, Greg Roberts, and Bryan Conway. Honorary pallbearers will be A.B. “Ben” Chandler, Linda Peak, Jerry Boyd, Kevin Girkey, and Ron Holland. In lieu of flowers, expressions of sympathy may be made to Bluegrass Hospice Care. Arrangements are under the direction of Harrod Brothers Funeral Home.

The family of Mae Girkey created this Life Tributes page to make it easy to share your memories.

Frankfort – Services for Mae Roberts Girkey will be held at Harrod...