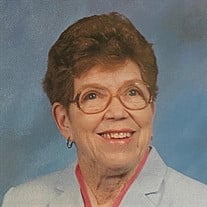 Martha Lee Fallis passed on to meet her heavenly Father this past Sunday, April 5, 2020. Born December 4, 1920, she was the third child and second daughter of Clarence Fleming and Allie O'Banion Wheeler. She was preceded in death by her parents, as well as a brother James Everett, and three sisters Mary Gilpin, June Anderson and Christine Wheeler. She is survived by three sisters Aileen Arnold and Doris Hyatt of Frankfort, and Bettie Phearson of Lexington. She was a graduate of Versailles High School. At a young age, she took on the responsibility of helping her mother raise seven other children when her father passed in 1935 and her mother had to go to work to support the family in Millville, Kentucky. It was during the Depression and she not only helped run the household but went to work at age 17. She was a member and local officer of the Distillery, Wine and Allied International Union joining in 1941 and working at National Distillers in Frankfort and Woodford County. During that time, she moved to Frankfort and later met and married George Fallis of Lawrenceburg, Kentucky in 1962. He preceded her in death in 1985. She was a loving aunt to 13 nieces and nephews. Wendy Gilpin Satterly, Judy Arnold Lee, Shelley Hyatt Morris, Amy Arnold Ballard, Jenny Arnold May, Chris Arnold all of Frankfort. Stephen Phearson, Oklahoma, Brian Anderson, Chelmsford, MA, Elizabeth Phearson Fulkerson, Lexington, Kentucky, Tony Hyatt and Barry Anderson of Louisville, Kentucky and Karen Anderson Bennett, Florida. Daryl Hyatt pre-deceased her, She was a straightforward, non-nonsense, determined personality who loved her family and could always be counted on to help out when needed. She was a dedicated member of the Highland Christian Church in Frankfort where she was a former Deacon, Elder and a member of the Church Board. During those years, she was active in Sunday school, calling on shut ins, and helping organize many functions in the Church’s Fellowship Hall. At the present time, considering the current health situation, the family will hold a private service with a Celebration of Life service will be announced at a later date. In lieu of flowers, Martha’s family request you make a donation to the Emergency Community Food Pantry of Franklin County in her honor. Arrangements are under the direction of Harrod Brothers Funeral Home & Crematory.

Martha Lee Fallis passed on to meet her heavenly Father this past Sunday, April 5, 2020. Born December 4, 1920, she was the third child and second daughter of Clarence Fleming and Allie O'Banion Wheeler. She was preceded in death by her parents,... View Obituary & Service Information

The family of Martha Wheeler Fallis created this Life Tributes page to make it easy to share your memories.

Martha Lee Fallis passed on to meet her heavenly Father this...