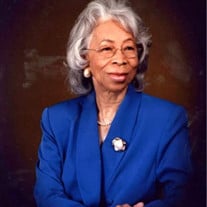 Frankfort – Dr. Mary Levi Smith-Stowe, age 84, passed away at home on Saturday, November 28, 2020. Private services will be held. She was born in Hazlehurst, Mississippi, on January 30, 1936, to the late Elder William Monroe Levi and Mrs. Byneter Markham Levi. Dr. Smith-Stowe was a 1957 graduate of Jackson State University where she earned her Bachelor of Arts degree. She then earned her Master’s Degree and Ph.D. in education in 1964 and 1970, respectively, from the University of Kentucky. With a strong dedication to education, Dr. Smith-Stowe was named to both the University of Kentucky and Jackson State University Alumni Hall of Fame. In addition, she received an Honorary Doctorate in Public Service from Kentucky State University. In 1991, Dr. Smith-Stowe was named the 11th President of Kentucky State University, leading her to accomplish the titles of the First Female President of Kentucky State University, and the First African American Female President in the State of Kentucky. In addition to her education field, she was also a member of Delta Sigma Theta Sorority, Inc. Dr. Smith-Stowe retired after serving as the President of Kentucky State University. She is survived by her husband, Pastor James H. Stowe; children, Dr. Darryl V. Smith (Kristel) and Danee L. Smith (Lillibeth); son-in-law, Rance Williams; step-daughter, Melanie Robbins; and by her grandchildren, Danielle, Morgan, Brittany, Blake, Raven, Henry, Janae, Shiloh, and Noelle. She was also blessed with 4 great-grandchildren and many nieces, nephews, beloved relatives and friends. In addition to her parents, she was preceded in death by her first husband, LeRoy V. Smith; daughter, Angela Williams; step-son, James H. Stowe, Jr. and by her siblings. Serving as pallbearers will be family and friends. In lieu of flowers, expressions of sympathy may be made to the Mary L. Smith Endowed Scholarship at Kentucky State University. Live Streaming will be available on Friday, December 4, 2020, after 12:00 p.m. via https://kysu.zoom.us/j/96422591180 Arrangements are under the direction of Harrod Brothers Funeral Home & Crematory.

Frankfort &#8211; Dr. Mary Levi Smith-Stowe, age 84, passed away at home on Saturday, November 28, 2020. Private services will be held. She was born in Hazlehurst, Mississippi, on January 30, 1936, to the late Elder William Monroe Levi and... View Obituary & Service Information

The family of Dr. Mary L. Smith-Stowe created this Life Tributes page to make it easy to share your memories.