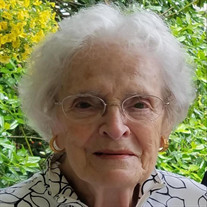 Mary Anna Parker Watson, 92, departed her earthly life January 21, 2021, in Midlothian, VA, where she lived since 2017. She was preceded in death by her husband of 63 years, Lawrence (Larry) E. Watson, and her parents R.L. and Nola Parker. Born November 26, 1928, in Portsmouth, Ohio, Mary Anna, was the only child of R.L. and Nola Parker. Because her father was a highway engineer and surveyor, she lived in several towns in KY including Ashland, where she met Larry while attending Ashland High School. They later married in 1951. Mary Anna was a graduate of Virginia Intermont College, Bristol, VA, and the University of KY. She was a member of Kappa Delta sorority. Larry and Mary Anna moved to Frankfort in 1964, where they became longtime members of First Baptist Church. Mary Anna served as church secretary at First Baptist for many years. She sang in the church choir and was an active member of The Golden Circle Sunday School class. Mary Anna also served as church secretary at Buck Run Baptist Church and East Frankfort Baptist Church. During the time she lived in Midlothian, VA, she attended Huguenot Road Baptist Church and was a member of the Betty Vaughan Sunday School class. Mary Anna was a diehard UK fan; she and Larry had season football tickets for over 40 years. She lived through the Wildcat’s golden years and remained steadfast in her belief that glory would one day return. An English major in college, she was excellent at grammar and spelling – she could spot a misspelled word instantly, and constantly reminded her daughters to use correct grammar. She endured her husband's passion for golf, loved bridge, and enjoyed spending winters in Destin, FL. She was also a talented artist and seamstress and, unbeknownst to most, played the piano beautifully. Mary Anna is survived by her daughters Susan Tinnon (Mack), Bowling Green, KY; Laura Fowler (Alan), Moneta, VA; and Amy Goobic (David), Midlothian, VA. She is also survived by her beloved grandchildren Rachel Rodzewicz (David), Henrico, VA; Elizabeth Shumaker (Harry), Tuscaloosa, AL; Mary Fryberger (Clint), Paducah, KY; Graham Fowler, Richmond, VA; Anna Fowler, Richmond, VA; Parker Tinnon, Bowling Green, KY; and Alexander Goobic, Midlothian, VA; and her great grandchildren Harry Shumaker, Millie Jane Fryberger, and Warren Fryberger. Walk through visitation will be held at Harrod Brothers Funeral Home, on Saturday, February 13, 2021, from 10:00 a.m. until 12:00 p.m. with private family services to follow. Graveside services will be held at 1:30 p.m. at Frankfort Cemetery on Saturday. Serving as pallbearers are Mack Tinnon, Alan Fowler, David Goobic, Graham Fowler, Parker Tinnon, and Alexander Goobic. Many thanks are extended to all who visited, called, prayed, sent cards and provided meals. The family’s most sincere thanks go to Hospice of Virginia and the amazing care provided to her and the family, by her nurse, Rachel, and aide, Tina. Expressions of sympathy may be made in her memory to the First Baptist Church, 201 St. Clair St., Frankfort, KY 40601; or Hospice of Virginia, 2235 Staples Mill Rd #100, Richmond, VA 23230. Arrangements are under the direction of Harrod Brothers Funeral Home & Crematory.

Mary Anna Parker Watson, 92, departed her earthly life January 21, 2021, in Midlothian, VA, where she lived since 2017. She was preceded in death by her husband of 63 years, Lawrence (Larry) E. Watson, and her parents R.L. and Nola Parker. Born... View Obituary & Service Information

The family of Mary Anna Watson created this Life Tributes page to make it easy to share your memories.