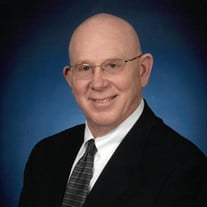 Frankfort – Arthur Michael “Mike” Salyers, age 72, passed away peacefully in his home on the farm on Thursday, October 21, 2021. A memorial service will be held at Graefenburg Baptist Church on Saturday, October 30, 2021, at 3:00 p.m. with Dr. Philip Meade and Dr. Jay Padgett officiating. Mike was born in Frankfort, Kentucky on May 19, 1949, to the late Buford Collins Salyers and Margaret Nell Arvin Salyers. He was a 1967 graduate of Franklin County High School and graduated from Georgetown College in 1972, where he was a member of Phi Kappa Alpha. In his youth, he was an avid outdoorsman, leading him to be a lifelong farmer. He was a Veteran of the Army Reserves and Kentucky National Guard. Mike retired from the Kentucky State Government after 28 years served as Secretary of OSHA. He was a longtime and dedicated member and Deacon at Graefenburg Baptist Church. He is survived by his sons, Benjamin Michael Salyers (Bren), Timothy James Salyers, and Patrick Thomas Salyers; brother, Kevin Salyers; grandson, Charles Jules Salyers; and nephews, Sean Warren and Brad Warren. In addition to his parents, he was preceded in death by his sister, Patricia Warren. In lieu of flowers, expressions of sympathy may be made in Mike’s memory to Graefenburg Baptist Church, 11288 Frankfort Road, Waddy, Kentucky 40076. Arrangements are under the direction of Harrod Brothers Funeral Home & Crematory.

The family of Mike Salyers created this Life Tributes page to make it easy to share your memories.