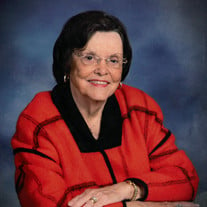 Frankfort – Naomi Elizabeth Prater Bailey, age 84, passed away Tuesday, January 15, 2019. Services will be held at Harrod Brothers Funeral Home on Monday, January 21, 2019, at 1:00 p.m. with Rev. Dale G. Prater officiating. Burial will follow at Frankfort Cemetery. The family will receive friends at Harrod Brothers Funeral Home from 2:00 p.m. until 5:00 p.m. on Sunday, January 20, 2019. Mrs. Bailey was born in Pikeville, Kentucky, on January 7, 1935, to the late Andrew Jackson Prater and Lexie Hamlin Prater. She was united in marriage to her husband of 62 years, James Arthur “Jim” Bailey, of Frankfort. She was a genealogist, worked in real estate, served as an Election Officer, a legal secretary, and substitute teacher. Mrs. Bailey was a faithful member of First United Methodist Church. Above all, she was a dedicated wife, mother, and grandmother. In addition to her husband, she is survived by her children, James Bryan “Jamie” Bailey (Teresa “Tina”) and Eric “Rick” Bailey; siblings, Loretta Stumbo of Vero Beach, Florida, Reaford “Ray” Prater, of Lancaster, Kentucky, and Dale G. Prater, of Sherwood, Arkansas, and beloved grandson, Jimmy Bailey. Along with her parents, she was preceded in death by her siblings, Pansy Hopkins, Bernice Cloud, and Avery Prater. Serving as pallbearers will be family and friends. In lieu of flowers, expressions of sympathy may be made to the Christian Appalachian Project, www.christianapp.org Arrangements are under the direction of Harrod Brothers Funeral Home.

The family of Naomi Elizabeth Bailey created this Life Tributes page to make it easy to share your memories.