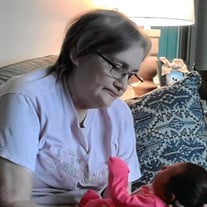 Frankfort – Ora Ann Kern, 69, passed away Wednesday, March 9, 2022. A gathering of family and friends will be held from 4:00 p.m. until 7:00 p.m. on Wednesday, March 16, 2022, at Harrod Brothers Funeral Home. Ora was born in Richmond, Indiana on November 5, 1952, to the late Ora and Mamie Elizabeth (Roberson) Kern. Ora was a loving, caring, and feisty one but she loved everyone. Just please don’t get on her nerves because she would tell you. She retired from Montaplast of North America in Frankfort where she was employed as a machine operator. She is survived by Mark Fitzgerald and Randall Metts Sr.; her children, Randall Metts Jr., Carol Metts, Christopher Fitzgerald, Leslie Fitzgerald, Forrest Metts, Ora Metts, and Danyelle Kincaid; step-son, Ethan Fitzgerald; several grandchildren including those she helped raise, Jordaan Metts, Chad Metts, Daja Metts, and Dejhaun Metts; and her pride and joy, her great-granddaughter, Kinzley Rose Metts. In addition to her parents, she is preceded in death by her brother, Joseph Mayberry, and her son, Timothy Michael Metts. In lieu of flowers, expressions of sympathy may be made to the American Heart Association Arrangements are under the direction of Harrod Brothers Funeral Home & Crematory.

The family of Ora Ann Kern created this Life Tributes page to make it easy to share your memories.