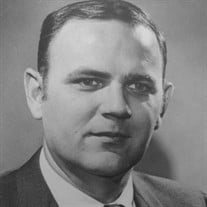 Frankfort – Pat Newman Miller, age 89, passed away on Thursday, June 24, 2021. Mr. Miller was born in Lebanon, Kentucky, on February 19, 1932, to the late Chester Miller and Katherine Farley Miller. Following graduation from Lebanon High School, a tour in Korea with the United States Army, and obtaining his degree from the University of Kentucky, he began his employment with the State in 1957 with the Kentucky Department of Personnel where he advanced to head the agency. He was appointed Deputy Secretary of KTRS in 1968 and promoted to Executive Secretary in 1976. Mr. Miller’s tenure as Executive Secretary was marked with a determination to improve the System’s financial status and to implement needed improvements in the benefits of active and retired members. The all-important achievement in the System’s funding status occurred while the KTRS implemented numerous improvements for both active and retired members. Mr. Miller was directly responsible for many of the achievements experienced in the KTRS and that the Board was deeply appreciative of his devoted and highly successful service to the KTRS and its members. He is survived by his wife of 58 years, Norma Greenup Miller; children, Pat Miller (Janelle), Joe Miller (Teresa), Jenny Jones (Larry), Bart Miller (Becky); step-children, Stephanie Rabe Plumlee and Jeane Rabe Cox; and grandchildren, James Newman Miller (Rachel), Harrison Duncan Miller, Elizabeth Miller Rhodus (Adam), and Jason Miller (Desi), and step-granddaughter, Elizabeth R. Plumlee. In addition to his parents, he was preceded in death by his brother, Joe G. Miller, and step-daughter, Allison G. Rabe. Services will be held privately for family. Arrangements are under the direction of Harrod Brothers Funeral Home & Crematory. Condolences may be shared via the online guestbook at www.harrodbrothers.com

The family of Pat N. Miller created this Life Tributes page to make it easy to share your memories.