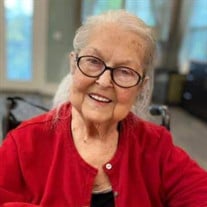 Frankfort – Patricia Jane Woodside Jones, age 84, passed away Saturday, February 26, 2022. Services will be held at Harrod Brothers Funeral Home on Friday, March 4, 2022, at 1:00 p.m. with Rev. Todd Lester officiating. Burial will follow at Sunset Memorial Gardens. The family will receive friends at Harrod Brothers Funeral Home from 11:00 a.m. until 1:00 p.m. service time on Friday. Patricia was born in Frankfort on January 31, 1938, to the late John Miles Woodside and Flossie Dell Hall Woodside. During the 1970s, Patricia served as the Branch Manager for the State’s Division of Emergency Medical Services in the Cabinet for Human Resources. She was among those who initiated, wrote, and oversaw the Emergency Medical Technician training course for first responders. She was also instrumental in the various grant programs that enabled Kentucky’s cities and counties to purchase properly-fitted ambulances that met the highest of national standards and promoted the proper training of emergency medical personnel changing the future of emergency services in Kentucky. Undeniably, her dedication to the mission of the Division of Emergency Medical Services has saved the lives of countless Kentuckians, young and old, over the decades. In her spare time, Patricia was an avid reader and gardener. In addition, she was very involved in theater throughout her life. She appeared in school plays as a child, was active in organizing and directing plays for Frankfort’s Children’s Theater, and appeared in a lead role in Arsenic and Old Lace. She will be remembered for her unwavering love for her family, and for her selflessness and humanitarianism. She is survived by her children, Teresa Kamarata, Lisa Ballinger, Kevin Ballinger, and Johnna Ballinger; step-son, Randy Jones; brother, Bill Woodside (Martha); grandchildren, Chris Ballinger, Jonathan Kamarata, Anthony Kamarata, BeBe Kelty (Ryan), Justin Ballinger, Kalin Price, Lara Parker (Chris), and Evan Montgomery. She was also blessed with six great-grandchildren, Elijah, Meriah, Bryson, Edan, Drake, and Paislee; one beloved great-granddaughter on the way, Della Jane, and by several nieces and nephews. In addition to her parents, she was preceded in death by her husband, Clifford Jones; siblings, Beatrice Blankenship, Eugene Woodside, and Richard Woodside; and by her step-son, Gary Dale Jones. Serving as pallbearers will be Billy Woodside, Rick Woodside, David Blankenship, Jason Woodside, Jim Goodman, and Dan Harrod. In lieu of flowers, expressions of sympathy may be made to the Franklin County Humane Society or the International Committee of the Red Cross – Ukraine Crisis. Arrangements are under the direction of Harrod Brothers Funeral Home & Crematory.

The family of Patricia Jones created this Life Tributes page to make it easy to share your memories.