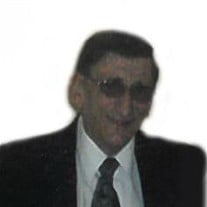 Frankfort – R.C. Wright, age 77, passed away Sunday, December 16, 2018, in Lexington. Services will be held at Harrod Brothers Funeral Home on Wednesday, December 19, 2018, at 11:00 a.m. with Rev. David Smith officiating. Burial will follow at Frankfort Cemetery. The family will receive friends at Harrod Brothers Funeral Home from 5:00 p.m. until 8:00 p.m. on Tuesday, December 18, 2018. Mr. Wright was born in Owen County, Kentucky, on February 28, 1941, to the late Clarence Wright and Eloise Smoot Wright. He was united in marriage to Cheryl Darlyne Barnett Wright, who also preceded him in death. He retired from Frankfort Plastic after serving many years as an operator. He is survived by his son, Gene Todd Wright (Kelli); siblings, Ronald Lee Wright (Joann), and Shirley Frances Luther; sister-in-law, Carol Maupin; grandchildren, Shelbi Lynn Snow and Kaylee Brooke Snow; step-mother, Ella Frances Wright; nephews, John Cummins, Martin Luther (Joan), and Kevin Luther; and great-nephew, Alex Luther. In addition to his parents and wife, he was preceded in death by his brother, Kenneth Larry Wright. Serving as pallbearers will be family and friends. Arrangements are under the direction of Harrod Brothers Funeral Home.

The family of R.C. Wright created this Life Tributes page to make it easy to share your memories.