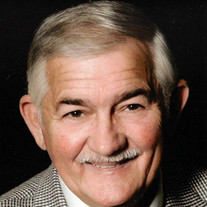 Frankfort – Ralph Thomas “Tom” Penn, age 78, passed away at home on November 18, 2020, surrounded by his family. Tom fought cancer for several months, with Bluegrass Hospice Care providing him comfort during the final weeks. Tom is survived by his wife of 33 years, Eleanor Cleveland Penn; his son, Roger Penn (Lora), of Fishers, Indiana and Martha Penn Blackburn (J.W.), of Frankfort; his bonus children, Laurie Thomas (Mark), of Cynthiana, Kentucky, Grant Cleveland (Quentin Eshleman), of Allentown, Pennsylvania, and Bill Mercer, of Memphis, Tennessee. He was also survived by his precious grandchildren, Madeline Penn, Julia Blackburn, Caroline Blackburn, Joe Thomas, and Hannah Thomas, as well as his children’s mother, Darla Snow Russell. He was preceded in death by his parents, Ralph and Edna Penn, daughter, Julie Michelle Penn, and grandparents, John B. and Mattie Penn. Tom was born June 4, 1942, in Frankfort, and was a 1960 graduate of Franklin County High School and a 1964 graduate of Eastern Kentucky University with a Bachelor of Science Degree. He was employed for 15 years with Metropolitan Insurance with the Sturm Insurance Agency. While working for Metropolitan, he began his second career in home building. He also owned Penn Carpets for over 30 years. In addition, raising livestock was a lifelong passion of his. During his early twenties, he was a member of Jaycees, TPA Association, and was also a third-generation mason, and recently a member of Cattlemen’s Association. He grew up in the First Baptist Church and was a longtime member of First Christian Church, where he served as Chair of the Property Committee, the Finance Committee, and as a Deacon. While Tom was a devoted husband and father, he cherished his role as grandfather the most. His grandchildren will remember their “Grandaddy” as a jokester, teacher, playmate, and so much more. Graveside services will be held at Frankfort Cemetery on Saturday, November 21, 2020, at 1:30 p.m. with Rev. Meredith Siler and Pastor Gary Brown officiating. He will be laid to rest next to his beloved daughter, Julie, and his parents. Serving as pallbearers will be J.W. Blackburn, II, Mark Thomas, Joe Thomas, Grant Cleveland, Bill Mercer, and Quentin Eshleman. The family requests memorial contributions to First Christian Church Education Fund, 316 Ann Street, Frankfort, Kentucky 40601, Hospice Bluegrass Care, 643 Teton Trail, Frankfort, Kentucky and Journey Church, SOAR Ministry, Survivors of Abuse Restored, 1237 White Oak Road, Stamping Ground, Kentucky 40379. Arrangements are under the direction of Harrod Brothers Funeral Home & Crematory.

The family of Ralph "Tom" Penn created this Life Tributes page to make it easy to share your memories.