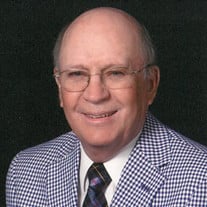 Frankfort – Robert S. Boden, 87, went home to his Lord, Friday, May 3, 2019. Born March 31, 1932, he was the widower of Sue Boden sharing 68 years of marriage before her death in 2018. Bob enjoyed a variety of career opportunities, including partnership with his father, Sam Boden, as owners of the Boden Oldsmobile – Cadillac Dealership for over 30 years, recently retired as a real estate broker with Capital Realty, and as a staff member of the Kentucky House of Representatives for 20 years. He was an active member of First Christian Church where he served as elder. Bob was involved in a number of community and state associations with terms as president of East Frankfort Kiwanis, KY Automobile Dealers Association and KY Golf Association. He was an avid enthusiast of golf, bridge and tennis. Bob is survived by his son, Sam Boden (Trisha); daughter, Lynn Banks (Bob); grandchildren, Brent Boden (Nikki), Sarah Bradley (Ryan), Hailey Boden (Christian), Micah Banks Cook (Michael), and Katie Banks; and 11 great-grandchildren who knew him as “Papa”. Also surviving are two half-brothers, Kenneth and David Boden; half-sister Dorothy Coots, sister-in-law, Mary Brezina (Ed); numerous nieces and nephews; and close friend of the family, Jayne Arnold. In addition to his wife Sue, Bob was preceded in death by his father, Samuel Detweiler Boden; mother, Mary Ruth Sprowl Epperson and a half-brother, Keith Epperson. A Celebration of Life service will be held at First Christian Church, 316 Ann Street, Frankfort, Kentucky at 1:00 p.m. on Saturday, May 11, 2019, with Rev. Meredith Siler officiating. Visitation will be held from 11:00 a.m. until 1:00 p.m. service time on Saturday. In lieu of flowers, expressions of sympathy may be made to the First Christian Church. Arrangements are under the direction of Harrod Brothers Funeral Home.

The family of Robert S. Boden created this Life Tributes page to make it easy to share your memories.