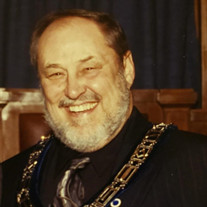 Frankfort – Robert Lee Cummins, Sr., age 81, passed away on Thursday, January 7, 2021. Services will be held at Harrod Brothers Funeral Home on Tuesday, January 12, 2021, at 11:00 a.m. with Bro. Joe Riggs officiating. Burial will follow at Sunset Memorial Gardens. The family will receive friends at Harrod Brothers Funeral Home from 5:00 p.m. until 8:00 p.m. on Monday and from 10:00 a.m. until 11:00 a.m. service time on Tuesday. Masonic Rites will be held at Harrod Brothers Funeral Home at 7:00 p.m. with Open Lodge at 6:30 p.m. on Monday. Mr. Cummins was born in Louisville on June 20, 1939, to the late John Thomas Cummins and Christine Smith Cummins. He attended the University of Kentucky and Kentucky State University, as well as DeVry Institute of Technology. He retired from Jim Beam Distillery after 27 years serving as a machinist, tool designer, and completed tool rebuilds. Mr. Cummins was a Veteran of the Kentucky National Guard. In addition, he served as a Past President of the Capital City Shrine Club and was a member of the Oleika Shriners in Lexington, as well as the Kosair Shriners in Louisville. He was a Past Master and member of Hiram Lodge #4 F & AM. He also attributed as the main design conceptualist of the mural inside of the Masonic Hiram Lodge #4 painted by Mr. Wade Hughes. Mr. Cummins served as Deputy Sheriff and Bailiff for nearly 10 years with the Franklin County Sheriff’s Office serving under Ted Collins, Steve Clark, and completed his tenure under Pat Melton. He enjoyed time spent on the farm as a cattle and tobacco farmer. He will be remembered greatly as a loving father, grandfather and friend to many. He is survived by his children, Russell Lewis (Regina), James Thomas Cummins (Kim), and Jennifer Elnemer (Samir); sisters, Peggy Lynn Goldberg, Zelda Patterson, Betty Lou Owens, and Eloise Ford; grandchildren, Cari Marie Hager, Johnathon Lewis Cummins, Yasmin Marie Masri, Lyndsey Cummins, and Megan Cummins; and great-grandchildren, Lily Mae Cummins and Malikai Lewis Cummins. In addition to his parents, he was preceded in death by his wife, Alma Marie Long Cummins; son, Robert Cummins, Jr., and siblings, John Thomas Cummins, Jr., and Mildred Jeanette Stewart. Serving as pallbearers will be Russell Cummins, Jamie Cummins, John Cummins, Jeff Goldberg, Daniel Goldberg, and Tommy Long. Arrangements are under the direction of Harrod Brothers Funeral Home & Crematory.

The family of Robert "Bobby" Cummins created this Life Tributes page to make it easy to share your memories.