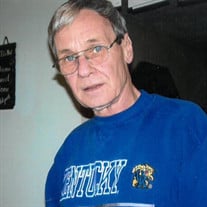 Frankfort – Robert “Bob” Kauffeld, age 75, passed away Saturday, February 29, 2020, at the University of Kentucky Medical Center. Services will be held at Harrod Brothers Funeral Home on Thursday, March 5, 2020, at 1:00 p.m. with Rev. David Smith officiating. Visitation will be held at Harrod Brothers Funeral Home from 11:00 a.m. until 1:00 p.m. service time on Thursday. Bob was born in Cleveland, Ohio on March 14, 1944, to the late Henry Kauffeld and Edith Foried Meyer. He was a Veteran of the United States Army, and retired from Neogen, after spending many years as a supervisor. In his spare time, he enjoyed camping and golfing, but especially loved being with his family. He is survived by his wife, Mattie Ann Manley Kauffeld; children, Jennifer Goddard (Mike), Bryan Kauffeld, Charles Spencer, Jr. (Melissa), and Kenneth Spencer; brothers, Jimmy Meyer, Dennis Meyer, Mike Meyer, and John Kauffeld. He was also blessed with 7 grandchildren and 2 great-grandchildren. In addition to his parents, he was preceded in death by his brothers, David Meyer and Bill Kauffeld. Arrangements are under the direction of Harrod Brothers Funeral Home & Crematory.

The family of Robert "Bob" Kauffeld created this Life Tributes page to make it easy to share your memories.