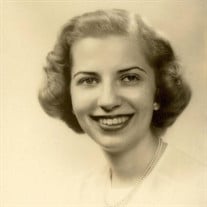 Rosemary Muchmore, 87, passed away in Kalamazoo, Michigan, on June 25. She was the wife of the late Ronald Neil Muchmore to whom she was married for 44 years. Together, they had three children, Neil Allen Muchmore (deceased), Angela Muchmore Patz of Seattle, WA, and James Allen Muchmore (Elaine Sayre) of Kalamazoo, MI. Rosemary was born on November 27, 1932, in Cincinnati, OH, to Frank and Vivien Strifler. She was one of four children. After graduating from Mariemont High School (Ohio), she attended the University of Cincinnati where she studied home economics and was a member of Alpha Delta Pi sorority. While still in high school, Rosemary enjoyed appearing on her mother’s TV cooking show, The Magic Tele-Chef, which aired on WLWT in the early days of television. This experience led to a lifelong love for cooking. Throughout her life, Rosemary collected thousands of recipes and prepared marvelous meals for her family to savor. In her spare time, she also enjoyed gardening, sewing, knitting, and quilting. Rosemary lived much of her life in Frankfort, KY, where she was an active member of the First Presbyterian Church. After retiring from her job as a clerk-typist for the Kentucky Department of Natural Resources, she moved to Kalamazoo, MI, to be close to her son. In addition to her children, she is survived by her sister (Suzanne Strifler), four grandchildren (Kally and Boone Patz of Seattle, WA, and Grace and Sadie Muchmore of Kalamazoo, MI), and many nieces and nephews. Funeral services will be held at Harrod Brothers Funeral Home on Thursday, July 2, 2020, at 4:00 p.m. Visitation will be at Harrod Brothers Funeral Home from 2:00 p.m. until 4:00 p.m. Rosemary will be buried at Rest Haven Memorial Park in Evandale, Ohio, on Friday at noon. Arrangements are under the direction of Harrod Brothers Funeral Home & Crematory. Condolences may be shared via the online guestbook at www.harrodbrothers.com

Rosemary Muchmore, 87, passed away in Kalamazoo, Michigan, on June 25. She was the wife of the late Ronald Neil Muchmore to whom she was married for 44 years. Together, they had three children, Neil Allen Muchmore (deceased), Angela Muchmore... View Obituary & Service Information

The family of Rosemary Muchmore created this Life Tributes page to make it easy to share your memories.

Rosemary Muchmore, 87, passed away in Kalamazoo, Michigan, on...