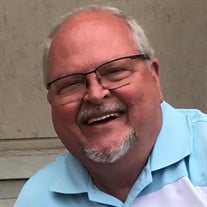 Georgetown – Stephen Paul Lanphierd, age 67, passed away August 16, 2021. A Celebration of Life will be held at 3:00 p.m. at The Elizabeth on Sunday, October 3, 2021. A gathering of family and friends will be held from 2:00 p.m. until 3:00 p.m. on Sunday. Steve was born in Midland, Michigan on September 23, 1953. He began his career with Kentucky Utilities in 1973 as an Operator Trainee at the Ghent Generating Station in Carroll County, Kentucky and worked his way up to Shift Supervisor in 1984. By 2001, Steve was so well respected in the company that he was promoted to Productions Supervisor at the Tyrone Plant in Versailles, Kentucky. He retired from Kentucky Utilities in May 2017 with 42 years of service. It was during his tenure at the Tyrone Plant that he met Janet, who was quickly impressed by his passion for his position at the plant as well as the care he had for his employees. He blessed Janet with almost 17 wonderful years of marriage. His abilities were endless, creating beautiful custom designed projects at their home in Georgetown, Kentucky. Steve had an uncanny ability to solve problems, create solutions and fix 99.9% of the projects he encountered. He always used his God given talents to positively influence other people’s lives at a moment’s notice. He was dedicated to helping his family and church family (Memorial Baptist Church) regardless of the task. Steve will be greatly missed and will always be remembered by his love for his grandchildren, work ethic, creativity, sense of humor, smile, generosity and selflessness. Stephen Lanphierd is preceded by his parents, Rollin and Dorothy Lanphierd. He watches over his wife, Janet Lanphierd and children, Jill Adcock and Jacob Dunkerson and their son Tenzin; Shari and Marcus Barnes and their children Xavier and Ruby; and Stepson Jeremy Marston, his wife Lou-Ann and daughter, Taylor. Arrangements are under the direction of Harrod Brothers Funeral Home & Crematory.

The family of Steve Lanphierd created this Life Tributes page to make it easy to share your memories.