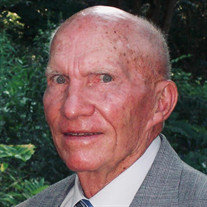 Stewart Lucas Waits, 97, of Bald Knob, KY, passed away at home on the farm October 30, 2021, surrounded by family. Born October 13, 1924, he was the youngest child of Curtis Austin and Molly Blankenship Waits and a member of Pleasant Ridge Baptist Church. He graduated in 1942 from Bagdad High School as class salutatorian and served stateside in the Army Airforce from 1942-1946. A 1950 graduate of the University of Kentucky College of Agriculture, he started his career by teaching a Veteran’s Administration Class going farm to farm in the Bridgeport area, followed by a lifetime of farming alongside his wife, raising mainly tobacco and beef cattle. He was awarded Franklin County’s 1999 Pioneer Farmer of the Year. He was a charter member and first President of the Bald Knob Ruritan Club where along with other members, he constructed a softball field on Dry Ridge Road and organized leagues for youth, women, and men. He retired from the Frankfort Post Office in 1986 as a rural mail carrier serving both Bald Knob and Evergreen Road routes. He and his wife then became known as “The MUM People” at the Frankfort Farmer’s Market for over 20 years. He remained an avid UK fan and loved spending time with his entire family, especially his grandchildren and great grandchildren. He was preceded in death by his parents, stepmother Bertha Deakins Waits and siblings, Edmond Waits, Florence Waits Thurman, Frank Waits, Annie Waits Tyre Lee, and Ullman Waits. He is survived by his beloved wife of 69 years, Irene Hughes Waits; daughters, Marilyn Waits Owens (George) of Louisville, Phyllis Waits Bailey (Mike) of Bagdad, and Sandy Waits Phillips of Bagdad; five grandchildren, Gregory Lucas Bailey, Clinton Owens (Randi), Ellen Bailey Berry (Brandon), Rebecca Owens (fiancé Brian Leonard), Jeffrey Stewart Owens (Emily) and six great-grandchildren, Emma and Tucker Berry, George and Hank Owens, Frannie and Wyatt Owens. Pallbearers will be his grandchildren plus Brandon Berry, Richie Tyre, and Jim Pryor Morse. Honorary Pallbearers will be his nephews, Don Tyre, Garry Waits and Steve Waits; his nieces, Dorothy Louise Thurman Hulette and Joan Dale Tyre Tipton; George Owens, Mike Bailey, Joe O’Connell, Kenneth Watkins, and Wayne Shields. The family wishes to thank Cathy Spencer for her loving care and guidance over the past several months. Services will be held at Harrod Brothers Funeral Home on Wednesday, November 3, 2021, at 1:30 p.m. with Rev. Mike Napier officiating. Burial will follow at Frankfort Cemetery. Visitation will be held at Harrod Brothers Funeral Home from 10:00 a.m. until 1:00 p.m. on Wednesday, November 3, 2021. The family requests that all visitors wear masks while in attendance of visitation and services. Flowers are welcome, and expressions of sympathy may be made to Hosparus of Louisville, 3532 Ephraim McDowell Dr, Louisville, Kentucky 40205. Arrangements are under the direction of Harrod Brothers Funeral Home & Crematory.

Stewart Lucas Waits, 97, of Bald Knob, KY, passed away at home on the farm October 30, 2021, surrounded by family. Born October 13, 1924, he was the youngest child of Curtis Austin and Molly Blankenship Waits and a member of Pleasant Ridge... View Obituary & Service Information

The family of Stewart Waits created this Life Tributes page to make it easy to share your memories.