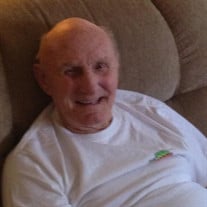 Frankfort – Thomas C. Sims, Jr., age 87, passed away on April 17, 2022. A Celebration of Life will be held at Harrod Brothers Funeral Home on Monday, April 25, 2022, at 4:00 p.m. with Rev. Jonas Hill officiating. Visitation will be from 3:00 p.m. until 4:00 p.m. service time on Monday. Mr. Sims was born in Harrodsburg on August 30, 1934, to the late Thomas Clinton Sims, Sr., and Hazel Marie Kurtz Sims. He graduated from Harrodsburg High School where he played the tuba in the band. Mr. Sims worked for Edwards Sausage Company out of Cynthiana, Kentucky, and the North Point Training Center in Danville, Kentucky. He retired from the Kentucky State Police in Frankfort. In his spare time, he enjoyed fishing, traveling, and spending time with his family. He is survived by his beloved wife, Anna Mae Kidd Sims; children, Lori Lilly, Robin Sims, Hollie Sims, and Michael Sims; step children, Warren Williams (Tonya), Suzanne Williams (Dave Coffey), Beverly Williams, and Steven Williams; brother, Hollie J. Sims (Pamela); and by many grandchildren and great grandchildren. He was also blessed with a host of nieces and nephews. In addition to his parents, he was preceded in death by one child, Stephanie Maegher, and by several siblings. Arrangements are under the direction of Harrod Brothers Funeral Home & Crematory.

The family of Thomas C. Sims created this Life Tributes page to make it easy to share your memories.