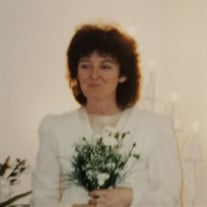 Veta Evelyn Brown, age 61, returned home peacefully April 25, 2019. She was born in, Liberty, Kentucky June 19, 1957. She graduated from Danville High School and attended Centre College in Danville, KY. Following her education, she began her career with Toyota Manufacturing and retired after 30 years of service. First and foremost, Veta was devoted to her children. She was an avid reader and loved her sports teams, the Cincinnati Reds, UK Wildcats, Pittsburgh Steelers, Penguins and Pirates. Veta is survived by her husband, Malcolm Wilson Brown, her sisters Vickie Greer, Kelli Murphy (James), her daughters, Jerry Denise Sweet (Da’Nique), Erin Christina Brown, her sons Dylan Mackenzie Brown, Dustin Clay Brown (Tiffany), Miles Wilson Brown, grandchildren, Shynescia Dinelle Metlock, Paxton, Alexander and Lincoln Brown, her step-mother, Ruth Sweet, and her step-father, Donald Atwood. She had a host of nieces, nephews and other relatives and friends that she loved dearly. She is preceded in death by her mother, Edna Atwood and father, Glenn Sweet. Family and friends are invited to Harrod Brothers Funeral Home on Monday, April 29, 2019, for the viewing from 11:00 a.m. until 1:00 p.m. followed by the funeral services at 1:00 p.m. Arrangements are under the direction of Harrod Brothers Funeral Home.

The family of Veta Evelyn Brown created this Life Tributes page to make it easy to share your memories.