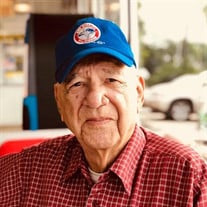 Victor Carl Johnson, age 94, went to be with his Lord on Friday, November 15, 2019, at Taylor Manor Nursing Home in Versailles., Kentucky. Memorial services will be held at Harrod Brothers Funeral Home, 312 Washington St., Frankfort, on Monday, November 25, 2019, at 2:00 p.m. with Dr. Mike Colston officiating. The family will receive friends at Harrod Brothers Funeral Home from 11:00 a.m. until 2:00 p.m. service time on Monday. Vic was born in Monterey, Kentucky, on October 29, 1925, to the late Victor Carl Johnson, Sr. and Ernestine Nichols Kemper Johnson. He was preceded in death by his loving wife of 75 years, Ruth Hazel Thomas Johnson; a son, Carl Kemper Johnson; and a sister, Patsy Jane Johnson Webb. Vic is survived by his daughter, Pam Ayer (Bill); grandchildren Heather Ayer, Sarah Elizabeth Butcher, and Pamela Riley Butcher; great grandchildren, Caydon Butcher, Rheanna Murphy, Steven Murphy, Shauntey Murphy, and Rylin Murphy; and two special nephews who were like sons, Jim Webb (Cherie) and Mike Webb. He was also blessed with several nieces and nephews. He was a 1943 graduate of Peaks Mill High School and studied finance at Louisiana State University. During WW II, he enlisted in the Navy at age 17 and served honorably as a medical technician at Great Lakes Naval Station in Illinois. He retired from the Kentucky Transportation Cabinet after 30 years of service as a Division Director at Motor Vehicle Licensing. During the last 45 years, Vic served as pastor at Greenup Fork Baptist Church in Owen County, Faith Baptist Church in Franklin County, Christiansburg Baptist Church in Shelby County, and Union Baptist Church in Henry County. He also served as interim and visiting pastor at churches in Franklin and surrounding counties into his late 80s. He was a member of Memorial Baptist Church at the time of his passing. He was most proud of his grandchildren and great grandchildren. He had a quick wit and was a superb storyteller, who kept family and friends of all ages entertained and laughing. He was an avid fisherman who enjoyed long days on the lake with his fishing buddies and his daughter. He and Ruth traveled extensively, visiting all 48 continental states. Vic will be remembered by family and friends as a loving, generous man of faith who walked closely with and drew strength from God’s word. He will be missed, but his family and friends take comfort in knowing that he is at peace and that we will be reunited again. “His lord said unto him, Well done, good and faithful servant; thou hast been faithful over a few things, I will make thee ruler over many things: enter thou into the joy of thy lord.” Matthew 25:23 (KJV) In lieu of flowers, expressions of sympathy may be made to the Franklin County Senior Activity Center or the Franklin County Humane Society. Arrangements are under the direction of Harrod Brothers Funeral Home.

The family of Vic Johnson created this Life Tributes page to make it easy to share your memories.

Victor Carl Johnson, age 94, went to be with his Lord on Friday,...