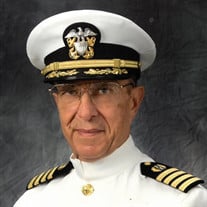 Victor “Vic” Fox, age 83, died peacefully at his home in Frankfort, Kentucky on April 23, 2020. Vic’s passing ended a tough thirty-year battle with heart disease and attendant complications. A graveside service with military honors will be held 1:00 p.m. at Kentucky Veterans Cemetery – North, on Wednesday, July 15, 2020, with Father Peter Doddema and Father Charles Howell officiating. A celebration of life at the Church of Ascension in Frankfort, Kentucky, will be held at a later date. Vic was born on August 12, 1936, in Atlantic City, New Jersey to George and Ernestine Northcutt Fox. Vic’s life was fueled by a high intellect and marked by an abiding, unyielding fidelity to honor and integrity in all his pursuits. Having lost both parents by age 13, Vic was parented by his Aunt Effie Northcutt Dunn and her husband Wood Dunn of Corinth, KY. Vic was a member of the first graduating class of Grant County High School where he was active in sports and school clubs. He held both an undergraduate (BA) degree and graduate (Juris Doctorate) degree from the University of Kentucky. He was admitted to and practiced before the U.S. Supreme Court, the U.S. 6th Court of Appeals, the Court of Military Appeals and the Supreme Courts of both Kentucky and South Carolina. He entered the U.S. Navy immediately upon graduation in June 1954, as a seaman recruit and retired as a Captain in the Judge Advocate General’s Corps in August 1996. During that time, he spent 10 years on active duty and 32 years in the Reserve. His duty assignments as a hospital corpsman included U.S. Navy hospitals in Memphis and Bethesda, the USS Rochester, and the Marine Corps Recruit Depot, San Diego. As a JAG officer he served in the Pentagon, Office of the Navy Judge Advocate General, Marine Corps Base, 29 Palms California; and Special Military Magistrate, Naval Base, Charleston, SC. As a civilian he served the Attorney General of Kentucky as the lead attorney for the Beverly Hills Supper Club Fire as well as the state’s asbestos litigation. He was also responsible for Kentucky being one of the first states to computerize the Attorney General’s Legal Docket. He served on the Board of Governors of the Kentucky Bar Association and as chairman of the KBA’s House of Delegates. Vic successfully argued three cases before the Supreme Court of the United States. He accepted a recall to active duty in the Navy to computerize the Navy Legal Docket, and during that recall graduated from the Navy Justice School. A life member of the Navy League and the Military Officers Association of America as well as the American Legion and VFW, Vic gave countless hours advocating in Frankfort and Washington for veterans and providing free legal services to deploying service persons and their families. His hobbies included model trains, golf, ball room dancing, vintage sports cars and travel, visiting all seven continents. His primary philanthropic interests were military memorials, the University of Arizona Sarver Heart Center, and the University of Kentucky Markey Cancer Center, Gill Heart Institute and College of Public Health, KET, Best Friends Animal Rescue and Life House no-kill shelter. He is survived by his wife of fifty-seven years, Virginia Gaines Fox. Though they had no children, Vic and Ginni were blessed with numerous nieces and nephews with whom they were exceptionally close. They are: Susan Dunn of Villa Hills, KY, and her children, Megan Rose Noll (Brian), of Ft. Thomas, KY, Tyler Fangman (Bailey) of Highland Heights, KY; Allison Fangman of Ludlow, KY; as well as Megan’s children, Emerson and Blaine: David Dunn of New South Wales, Australia and his sons, Clement (Emma) , Morgan, and Clement’s son Henry George, all of Melbourne, Australia; Gregory Gaines (Lynne) of Duxbury, MA and their children Dylan, Avery and Emmerson; Christopher Gaines (Mary Kate) of Blacksburg, VA and their children Evelyn and Broderick; and a beloved brother-in-law Dr. Paul Gaines (Linda) of Blacksburg, VA. Serving as pallbearers will be Tyler Fangman, Christopher Gaines, Dylan Gaines, Gregory Gaines, and Brian Noll. Arrangements are under the direction of Harrod Brothers Funeral Home & Crematory.

The family of Victor Fox created this Life Tributes page to make it easy to share your memories.