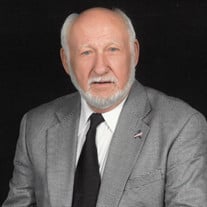 Frankfort – Wayne Voris Howard, age 90, passed away on Thursday, October 7, 2021. Public services will be held at Harrod Brothers Funeral Home on Wednesday, October 13, 2021, at 11:00 a.m. with Rev. Lisa Wood officiating. Private visitation and burial will be held. Voris was born in Murray, Kentucky, on July 27, 1931, to the late Robert Tellus and Nora Key Howard. He served as an Ordained Baptist Minister of Music in Northern Kentucky for over 20 years and retired from Kentucky State Government. Voris was a member of Immanuel Baptist Church in Frankfort. He was most fond of his award-winning barbeque with longtime friend, Richard Tanner. With an outgoing spirit and love for people, Voris enjoyed spending many evenings in downtown Frankfort visiting with friends. He is survived by his children, Mark Howard (Deborah) and Claire Chilson (Mark); grandchildren, Brad Howard (Susan), Adam Howard (Lauren), Kyle Howard (Nicole), Ryan Winkler (Amanda), Allison Carman, Corinne Winkler, Ben Chilson (Emily), and Sarah Pracht (Nick). He was also blessed with eight great-grandchildren, Hunter, Maddox, Olivia, Ava, Luke, Brooks, Rory, and Katherine. In addition to his parents, he was preceded in death by his siblings, Rudolph Howard and Voline Guthrie. Serving as pallbearers will be his grandchildren. Arrangements are under the direction of Harrod Brothers Funeral Home & Crematory.

The family of W. Voris Howard created this Life Tributes page to make it easy to share your memories.