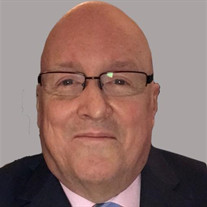 William L. “Billy” Davis, age 72, passed away surrounded by friends on Nov. 9, 2021, following eight years of declining health following a stroke in 2013. Born in Frankfort April 8, 1949, to the late William L. Davis, Sr. and Alma Beck Davis, he lived the past few years at Morning Pointe Assisted Living. Billy, also known by his friends as Wild Bill and Mr. Bill, graduated from Franklin County High School in 1967, and almost immediately began his career as a graphic artist for the Department of Education, Commonwealth of Kentucky. He was well known throughout the department for his design work and his sense of humor. He was a life-long member of First United Methodist Church, Frankfort, where he sang in the Chancel Choir and freely shared his artistic talents in the church’s many musical concerts and productions. For 30 years he made costumes and decorated for the church’s annual madrigal dinners and sang in the Madrigal Singers ensemble. He also was a member of the Fine Arts Committee and took great pride in helping choose and design the unique Pentecost chandelier in the entry to the church’s Wesley Center. He enjoyed celebrating and decorating seasons and holidays throughout the year, his two favorites being Halloween and Christmas. Lavish costumes and decorations were on display in his home and at social events. He also had an endearing love for dogs, especially those that reminded him of his childhood pet, a cocker spaniel named Butch. Bill is survived by his numerous friends, many of whom have shared fond memories of him on social media following his passing. He maintained special friendships with former co-workers and was “part of the family” to several church friends. Services will be conducted by the Rev. Jaime Williams and the Rev. Jackson Brewer at First United Methodist Church, 211 Washington St., Frankfort at 5 p.m. Friday, Nov. 19, 2021, with visitation preceding at 4 p.m. A time of fellowship will follow in Asbury Hall adjacent to the church. Expressions of sympathy may be in the form of donations to the church’s Music Program. Arrangements are under the direction of Harrod Brothers Funeral Home & Crematory.

The family of William L. "Billy" Davis Jr created this Life Tributes page to make it easy to share your memories.