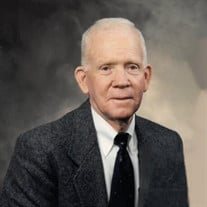 Frankfort – William Jesse “Billy” Mefford, age 93, passed away on Sunday, August 15, 2021. Services will be held at Peaks Mill Christian Church on Monday, August 23, 2021, at 10:00 a.m. with Rev. Ronnie McKinney officiating. Burial will follow at Peaks Mill Cemetery. The family will receive friends at Harrod Brothers Funeral Home from 2:00 p.m. until 5:00 p.m. on Sunday, August 22, 2021, and from 9:00 a.m. until 10:00 a.m. service on Monday. Billy was born in Stamping Ground, Kentucky on June 24, 1928, to the late William Elias Mefford and Mamie Mason Mefford. He retired after working as a farmer for most of his life. Billy was a lifelong member, Deacon and Elder at Peaks Mill Christian Church. He is survived by his children, Joe Mefford (Janice), Donald Mefford (Diana), Jeannie Kemper (James), Patty Gardner (Mark), and Lynne DeRuntz (Joe); sister, Joann Schrader; sisters-in-law, Jeanne Costigan, Donna Phillips, and Martel Karsner. He was also blessed with 13 grandchildren, 24 great-grandchildren, and several nieces and nephews. In addition to his parents, he was preceded in death by his beloved wife, Dorothy Louise Karsner Mefford and brothers, Owen Mefford and James Mefford. Serving as pallbearers will be his grandsons. Honorary pallbearers will be his granddaughters. The family would like to extend their sincere gratitude to the staff at Frankfort Regional Medical Center and Bluegrass Hospice Care for the wonderful care and compassion shown to Billy. Livestreaming of the services will be available on Monday, August 23, 2021, after 10:00 a.m. via www.harrodbrothers.com/service-videos In lieu of flowers, expressions of sympathy may be made in Billy’s memory to a charity of one’s choice. Arrangements are under the direction of Harrod Brothers Funeral Home & Crematory.

The family of William "Billy" Mefford created this Life Tributes page to make it easy to share your memories.